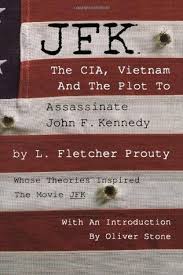 In FTR#1142, we detailed the little-known involvement of Chiang Kai-shek and Mme. Chiang Kai-shek in the 1943 conferences at Cairo and Teheran. (Mme. Chiang Kai-shek was the sister of T.V. Soong, one of Chiang’s finance ministers and the richest man in the world at one time.) This low-profile involvement apparently gave them considerable gravitas in helping to shape the postwar geopolitical agenda. While in Okinawa during Japan’s surrender in World War II, Colonel L. Fletcher Prouty was witness to the early commitment of decisive military resources to the wars that were to take place in Korea and Indochina/Vietnam. ” . . . . I was on Okinawa at that time, and during some business in the harbor area I asked the harbormaster if all that new material was being returned to the States. His response was direct and surprising: ‘Hell, no! They ain’t never goin’ to see it again. One-half of this stuff, enough to equip and supply at least a hundred and fifty thousand men, is going to Korea, and the other half is going to Indochina.’ In 1945, none of us had any idea that the first battles of the Cold War were going to be fought by U.S. military units in those two regions beginning in 1950 and 1965–yet that is precisely what had been planned, and it is precisely what happened. Who made that decision back in 1943-45? . . . .” WFMU-FM is podcasting For The Record–You can subscribe to the podcast HERE.