They Want You Dead – LewRockwell


Let’s cut through all the crap and put a dead stop to the vaccine killings. Let us threaten certain people with ????? for breaking the Nurenberg Code, for mass murder, for genocide, for the most disgusting lack of caring since the Nazi doctors walked the earth. It is somewhat reassuring that some of those doctors were hung.

Many people are out there, starting with doctors, nurses, and healthcare officials, who need to be stopped in their tracks. Let not one more needle be plunged into young and old alike, and let’s damn to hell all those who persist and favor these highly lethal COVID injections. Let us take the gloves off, stop being nice, stop dancing around the issue.

Mouthing obscenities at the obscene and shame those who just cannot come up with the backbone to call the evil out for what it is is a good place to start. It is not just the dead, with over 17,000 reported in Europe and the United States. They are attacking the kids.

One week after the Centers for Disease Control and Prevention (CDC) announced it was investigating heart inflammation in recently vaccinated young adults, Connecticut reported 18 new cases of heart problems among teens who had received a COVID vaccine. All 18 cases resulted in hospitalization — the vast majority for a couple of days, reported NBC Connecticut. The cases were reported to the Connecticut Department of Public Health by vaccine providers, said Deirdre Gifford, acting health commissioner.

If the FDA knows what’s good for it and the public,
they will retract their emergency authorization
of all three vaccines used against COVID-19.

The White House has become a center for evil, and that is seen in them still saying that young people should still get the shots. Dr. Antony Fauci not only needs to be fired but taken away in cuffs with five masks permanently glued to his face so no one can hear another word from his mouth. We should add up all the rights he has taken away from millions and make him eat what he has dished out. 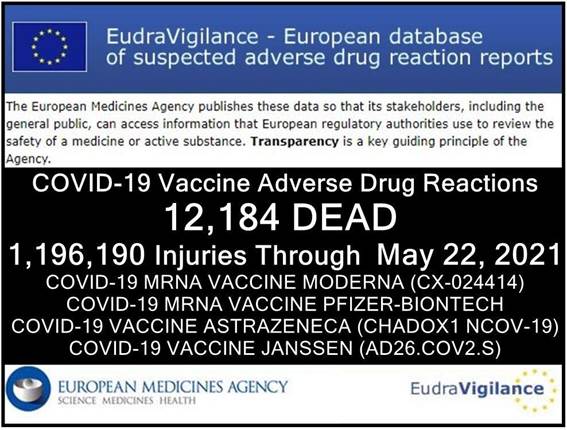 Do you think these words are strong enough, or should we sit back as the Germans did and let these people get away with murder. Michael Capuzzo, a New York Times best-selling author, has just published an article titled “The Drug That Cracked Covid.” The 15-page paper chronicles the gargantuan struggle being waged by frontline doctors on all continents to get ivermectin approved as a Covid-19 treatment, as well as the tireless efforts by reporters, media outlets, and social media companies to thwart them.

Would you believe I wrote in 2009, “It is not monsters from space that are planning this attack but human monsters who make rapists and your typical mass-murderers look like choir boys? It takes a special type of human consciousness, something beyond arrogance, and hates to plan a simultaneous assault on billions of people. And it takes an extreme weakness of the human spirit to bend over and let what is planned come into play. This attack is being financed and planned, not in secret but in full view and is almost guaranteed to be fully implemented someday.”

Obviously these Indians do not want to even test the idea that COVID vaccines offer a chance of death via lethal injections. There is nothing funny about any of this and those who favor these shots should join the Nazi party. Black lives matter are the new racists, communists and fascists all rolled into one horror story, the best mirror of the old Nazi there probably has ever been.

There are cases in India where the Vaccination Team is not even allowed to enter the village. On the other hand in many villages the Health Team members were beaten up with sticks and stones.

How Many Million Unnecessary Deaths

“Of the half a million deaths from COVID in the United States, there would have been 375 thousand fewer deaths if Invermetin was used. Ivermectin decreases the death rate by 75 % and, if given early, by 86%. There is blood on the hands of bureaucrats in Washington DC who have suppressed this life-giving medicine,” says Dr. Ryan Cole. Every public person who has obsessed with vaccines over all else is forever cursed with the hundreds of thousands of deaths that could have been prevented if just a little common sense and less hysteria had prevailed. The Media Censored COVID-19 Early Treatment Options That Could Have Reduced Fatalities by 85%.

Out of the 4 million supposedly dead from COVID worldwide, how many are dead because of the tireless efforts by reporters, media outlets, and social media companies who have denied the public Invermetin and other effective medicines? What should be done to these accessories to murder?

If you live in the wrong country today (or in the United States, live in the wrong state), your in for some big trouble. Read what CJ Hopkins writes comparing Nazi Germany to what is happening now in too many places in the world:

“But, seriously, there is no similarity whatsoever between Nazi Germany and “New Normal” Germany. Sure, both systems suspended the constitution, declared a national “state of emergency” enabling the government to rule by decree, inundated the masses with insane propaganda and manipulated “scientific facts,” outlawed protests, criminalized dissent, implemented a variety of public rituals, and symbols, and a social segregation system, to enforce compliance with their official ideologies, and demonized anyone who refused to comply … but, other than that, there’s no similarity, and anyone who suggests there is a dangerous social-deviant extremist who probably needs to be quarantined somewhere, or perhaps dealt with in some other “special” way.” Things are much worse than most of us think.

Imagine that you are creating a fabric of human destiny
with the object of making men happy in the end,
giving them peace and rest at last,
but that it was essential and inevitable to torture to death
only one tiny creature and to found that edifice on its un-avenged tears,
would you consent to be the architect on those conditions?
Tell me, and tell the truth.
Fyodor Dostoyevsky

The entire vaccine industry is based on the principle of sacrifice. Human sacrifice. It is perfectly all right and acceptable that one child is sacrificed to the vaccine God of death as long as we save a million others protecting them from suffering and death by disease. That is exactly what you will hear out of vaccinations mouths.

Unfortunately, it does not stop at one death, nor does it stop at a tide of suffering from vaccine damages that torment mothers, fathers, and their families for the rest of their lives. As sexual abuse betrays the deepest vulnerabilities of a person’s soul, vaccine attacks, damages and deaths are a disgusting display, a betrayal of love.

One should understand why I titled my vaccine book The Terror of Pediatric Medicine, which I had to delete from my site because of the benevolent pro-vaccine bias that crosses the border into terrorism brought to us by our favorite social media companies.

In September of 2020, CNN reported that vaccine experts warned the federal government against rushing out a coronavirus vaccine before testing has shown it’s both safe and effective. They presented decades of painful vaccine history showing why they were right. Of course, they were ignored. In the United States, there are more reported vaccine deaths in the last five months than previous 25 years. In Cambodia, several decades ago, we had what was called the killing fields. Now we have what will be remembered as the vaccine-killing fields.

If COVID vaccines protected populations from COVID-19, why have cases risen sharply in nearly every country that has launched mass vaccinations and surged in four of the five most vaccinated countries? Are vaccinated people more susceptible to COVID-19? Cambodia began its vaccination campaign in early February after having compiled zero fatalities; after its vaccination program started, the deaths started piling up. Are vaccine deaths being counted as COVID deaths?

I think Bill Gates will eventually qualify for the most unpopular man in history and should be first arrested for crimes against humanity.

For nearly 18 months, the mainstream media engaged in journalistic malpractice – quashing any suggestion that COVID-19 could have originated from the Wuhan Institute of Virology because their arch-nemesis, former President Trump, dared promote this very logical conclusion. Every aspect of this pandemic stinks to high heaven. Its been the most terrible year of the 21st Century.

“For the past 15 months, the U.S. population has been terrorized with demands for lockdowns, quarantines, social distancing, facemasks, skipping holidays, and now injections with experimental gene modification treatments (which are not true vaccines in the traditional sense),” writes James Rickards.

“People adapt by becoming anti-social and withdrawn. Disorders such as anxiety, depression, violence, drug abuse, alcohol abuse, and suicide all climb rapidly. The difficulty is that once behavior adapts in this way, it’s not easy to switch back to how things were before the pandemic,” continues Rickards.

Perhaps in the history of humanity, there have never been as cruel terrorists as our current crop of health officials, pharmaceutical CEOs, and all those who have supported their efforts.

Reprinted with permission from Dr.Sircus.com.


The Best of Dr. Mark Sircus