Are Covid Vaccines a Good Bet?


Everything’s a gamble, even crossing the street. That’s clearly the case with the COVID-19 vaccines, bum-rushed into production in less than one-sixth the normal time.

Coming from a meticulous analysis by independent researcher Hervé Seligmann with over 100 peer-reviewed publications under his belt, and using official Israeli government data, it’s like this – – –

If you’re more than 60 years old, to break even for the increased risk of dying during the three weeks after taking the first jab, the vaccine would have to give you 374 days of full protection from COVID-19. Just for you to break-even death-wise.

If it’s a two-jab vaccine as Pfizer is for example, then you need an additional 316 days of full protection from COVID-19 for a total of 690 days — just short of two years — just to break-even death-wise.

Even the most wildly optimistic super-vaxxers don’t claim anything like that. In fact, led by Dr. Fauci, they’re already planning next year’s 12 month COVID-19 booster shot.

“There is no U.S. Food and Drug Administration (FDA) approved vaccine to prevent COVID-19.” –Janssen Vaccination “FACT SHEET FOR RECIPIENTS AND CAREGIVERS” via WAL*MART

So clearly you don’t get full protection for two years.

How much protection do you get? According to the FDA, maybe no protection at all so it’s a gamble. And then there are the mutations.

None the less, WAL*MART is advertising the jab (May 24, 2021) “at no cost to you.” And the BigPharma/government/healthBlob amalgam is offering truly mind-bending incentives to get folks, particularly including the youngers, to go for this negative-expectation vaccine gamble. 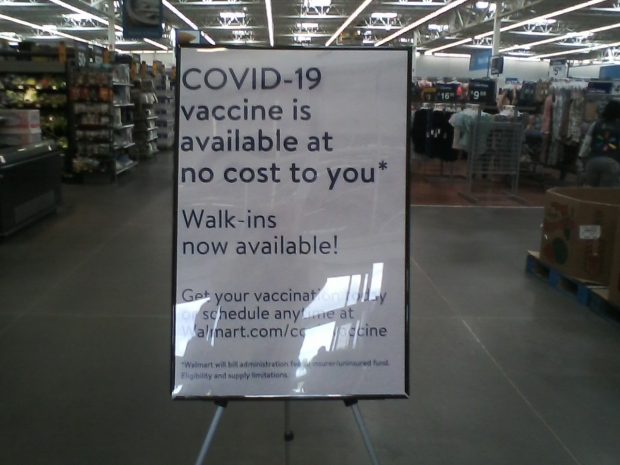 The good news is the wildly pro-vaxx enthusiasts have apparently over hyped and for whatever reasons, large numbers of us are exhibiting “vaccine hesitancy.”

This is particularly heartening since the younger you are, the less likely you are to be affected by COVID-19 and so the worse the gamble is. For children who rarely get the disease and even more rarely die from it, it’s sort of like betting that Joe Biden will take Donald Trump as his VP in 2024.

Seriously though, do you want your child or teen to take a significantly elevated three-week chance of dying from a vaccine that might not protect them from a mild disease that almost certainly won’t kill them?

Well, they’re already starting COVID-19 vaccine trials on children under 12. And unleashing all those incentives – – –

Mr. Seligmann and colleagues overcame that difficulty with an apparently otherwise over-looked tactic: Match groups of folks who got vaccinated against folks who hadn’t gotten vaccinated and compare the death rate of the two groups.

Because the groups were matched except for taking the jab, it is as certain as is possible that any difference in death rate was a result of the jab.

Mr. Seligmann chose the three-week period right after receiving the jab as the most critical period. Longer-term harm was beyond the range of his study as were those near-death experiences, non-fatal and/or debilitating vaccine injuries and just plain discomfort.

What he discovered is that during that period, those who were vaccinated were 14.6 times more likely to die than the folks who didn’t get vaccinated.

The reasons for that are interesting and you can find some of them in Mr. Seligmann’s paper here.

But you won’t know of the long-term negative effects of the jab from his study. Normally those have already been tracked for about six years before a vaccine is certified and released. However because these COVID vaccines are experimental drugs according to the FDA, and about 78% of experimental vaccines don’t make the grade, we’re likely in for a few unpleasant surprises in the next five years and possibly many more years to come.

Sort of like going to Vegas and betting your life in a negative expectation game. Roulette maybe – – –

And then you discover your return ticket is on an experimental vehicle that has a 78% chance of possibly catastrophic failure. You don’t always lose but you may not get paid — or survive the return trip either.

I’m not betting on the COVID vaccines, how about you? What about your kids?

Given the facts, should these experimental vaccines be bums-rushed off the market?


The Best of L. Reichard White