On April 1, 1933, shortly after Hitler was appointed chancellor, the Nazis staged a boycott of Jewish businesses in Germany. Members of the Storm Troopers (“die Sturmabteilung,” or the “Storm Department,” as I like to think of them) stood around outside of Jewish-owned stores with Gothic-lettered placards reading “Germans! Defend yourselves! Do not buy from Jews!” The boycott itself was a total disaster — most Germans ignored it and just went on with their lives — but it was the beginning of the official persecution of the Jews and totalitarianism in Nazi Germany.

Last week, here in “New Normal” Germany, the government (which, it goes without saying, bears no resemblance to the Nazi regime, or any other totalitarian regime) implemented a social-segregation system that bans anyone who refuses to publicly conform to the official “New Normal” ideology from participating in German society. From now on, only those who have an official “vaccination pass” or proof of a negative PCR test are allowed to sit down and eat at restaurants, shop at “non-essential” stores, or go to bars, or the cinema, or wherever.

Here’s a notice from the website of Prater, a popular beer garden in Berlin: 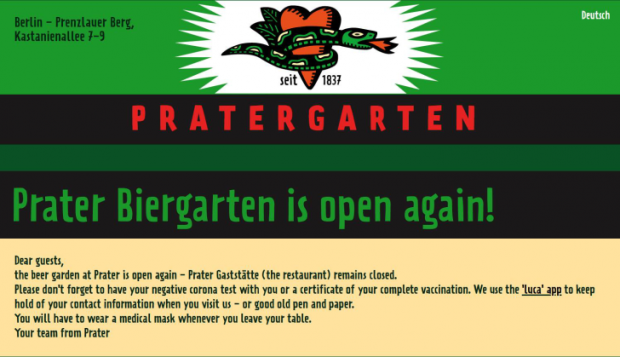 Of course, there is absolutely no valid comparison to be made between these two events, or between Nazi Germany and “New Normal” Germany, nor would I ever imply that there was. That would be illegal in “New Normal” Germany, as it would be considered “relativizing the Holocaust,” not to mention being “anti-democratic and/or delegitimizing the state in a way that endangers security,” or whatever. Plus, it’s not like there are SA goons standing outside shops and restaurants with signs reading “Germans! Defend yourselves! Don’t sell to the Unvaccinated and Untested!” It’s just that it’s now illegal to do that, i.e., sell anything to those of us whom the media and the government have systematically stigmatized as “Covid deniers” because we haven’t converted to the new official ideology and submitted to being “vaccinated” or “tested.”

Protesting the new official ideology is also illegal in “New Normal” Germany. OK, I think I should probably rephrase that. I certainly don’t want to misinform anyone. Protesting the “New Normal” isn’t outlawed per se. You’re totally allowed to apply for a permit to protest against the “Covid restrictions” on the condition that everyone taking part in your protest wears a medical-looking N95 mask and maintains a distance of 1.5 meters from every other medical-masked protester … which is kind of like permitting anti-racism protests as long as the protesters all wear Ku Klux Klan robes and perform a choreographed karaoke of Lynyrd Skynyrd’s Sweet Home Alabama.

Who says the Germans don’t have a sense of humor?

I don’t mean to single out the Germans. There is nothing inherently totalitarian, or fascist, or robotically authoritarian and hyper-conformist about the Germans, as a people. The fact that the vast majority of Germans clicked their heels and started mindlessly following orders, like they did in Nazi Germany, the moment the “New Normal” was introduced last year doesn’t mean that all Germans are fascists by nature. Most Americans did the same thing. So did the British, the Australians, the Spanish, the French, the Canadians, and a long list of others. It’s just that, well, I happen to live here, so I’ve watched as Germany has been transformed into “New Normal Germany” up close and personal, and it has definitely made an impression on me.

San Jose mass shooting victims: What we know about the 9 killed