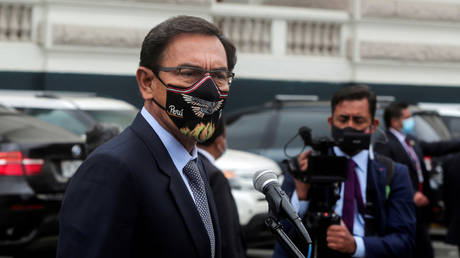 Former Peruvian President Martin Vizcarra has said he has Covid-19 and is symptomatic, nearly two months after provoking a major political crisis after it was revealed he’d received the jab as part of a clinical trial.

“Despite the necessary precautions to avoid bringing the virus home, my wife and I have tested positive for COVID and are symptomatic,” Vizcarra announced on Twitter on Sunday.

Peruvian president until November, Vizcarrra was ousted by the parliament over “moral incompetence” as Peru’s GDP plummeted amid the pandemic that saw the South American country reporting one of the highest Covid-19 death rates in the world.


It later turned out that Vizcarra’s fall from grace only began with his impeachment. In February, the ex-president was accused of using his position to enroll into the clinical trial of Chinese Sinopharm Covid-19 vaccine. While Vizcarra insisted that it was “brave” of him and his wife to volunteer for the experiment, a doctor, who was in charge of the trial, later testified that Vizcarra knew he was getting the real deal, and not a placebo.

The scandal rattled the government, prompting resignations of Peru’s then health minister Dr. Pilar Mazzetti and Foreign Minister Elizabeth Astete. The latter admitted that she had been vaccinated in January, weeks before the launch of the country’s vaccine rollout on February 9, that prioritized healthcare workers.


Earlier this month, lawmakers voted to ban Vizcarra from holding public office for 10 years, while Mazzetti was banned for 8 years, and Astete was handed out a one-year ban for their role in the so-called “VIP Vaccines” affair.

Peru is using a number of different jab in a bid to stop the spread of the virus. Apart from Sinopharm, AstraZeneca and Pfizer vaccines have been deployed in the immunization drive. Last week, Peru’s ambassador to Russia, Juan Genaro del Campo Rodriguez said that Peru is poised to sign an agreement for the supply of Russian Sputnik V vaccine as well.

Peru reported over 1,7 million cases, including nearly 60,000 deaths from the virus, as of Saturday.

Why did Montgomery v. Louisiana even reference “a finding of fact regarding a child’s incorrigibility”? – Reason.com