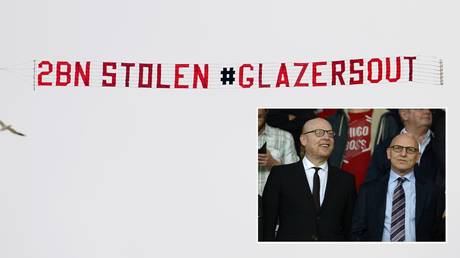 A day after throngs of furious Manchester United set ablaze an American flag outside Old Trafford, Red Devils fans have upped the ante in their campaign to compel the Glazer family to sell their stake in the world famous club.

With the relationship between the Glazer family and the Manchester United fanbase at an all-time low given their involvement in the ill-fated Super League breakaway plans, a further salvo has been fired by the Old Trafford faithful at the club’s ownership ahead of Sunday afternoon’s key fixture against Leeds United.

Matches between traditional rivals Manchester United and Leeds have always had a little extra spice to them, but Sunday’s game was more characterized by the internal feud taking place within corridors of power on the red half of Manchester – and was especially evident prior to kick-off when a plane was seen flying above the stadium carrying a banner which read: “2BN stolen. #GlazersOut“.

Joel Glazer, one of the co-chairmen at Manchester United, issued a groveling apology to the club’s irate fans in the wake of the disastrous Super League debacle, but his brother Avram Glazer has reportedly refused to issue conciliatory words in the wake of the move – which appeared to hasten the departure of another unpopular figure at Old Trafford, executive vice-chairman Ed Woodward.

But United fans clearly don’t want the sea change to stop there.

The message is loud and clear and must be consistent, the Glazers are not welcome.. #GlazersOut

Gotta be honest, don’t really get the plane banners. Protests absolutely – large numbers to demonstrate how much we care, but a plane just drifts past for 5 minutes in the sky and nobody really sees it

“The message is loud and clear and must be consistent, the Glazers are not welcome,” one fan wrote in reply.

Another wrote that the club’s ownership has “no shame” in the face of the extreme discontent from supporters. “And they see they don’t wanna sell. The absolutely audacity,” they added.

Another, though, wasn’t quite supportive of the banner, suggesting that protests of this kind won’t even represent a blip on the billionaire Glazer family’s radar.

“Gotta be honest, don’t really get the plane banners,” they wrote online. “Protests absolutely – large numbers to demonstrate how much we care, but a plane just drifts past for 5 minutes in the sky and nobody really sees it.”

Whatever the method used to make their feelings known, it is clear from the supporters that Manchester is anything but united today.