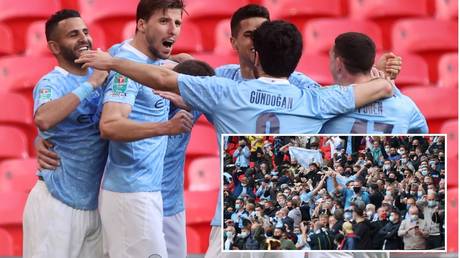 Manchester City welcomed fans back to English football as they secured the first silverware of the season with a late Aymeric Laporte strike enough to clinch their fourth successive Carabao Cup at the expense of Tottenham.

Frenchman Laporte provided the breakthrough in what was in truth a dull affair in front of 8,000 fans at Wembley Stadium on Sunday when he nodded in a late Kevin de Bruyne free kick to continue Pep Guardiola’s impressive cup final record.

Premier League champions-elect City had the better of the action throughout the 90 minutes but the identity of the goalscorer will ruffle some feathers in North London, as Laporte was lucky to remain on the field after coming close to picking up a second yellow card in the first half.

Tottenham, who had former player Ryan Mason in the dugout following Jose Mourinho’s sacking last week, continue their trophy drought, with the Londoners having gone empty handed in each of the previous 12 seasons.

The contrast between luckless Spurs’ form and that of Manchester City, though, couldn’t be clearer. Guardiola’s side have all but secured what would be the Spaniard’s third Premier League crown – while having already secured their position in this season’s Champions League semi-finals.

'See Something, Say Something' Returns