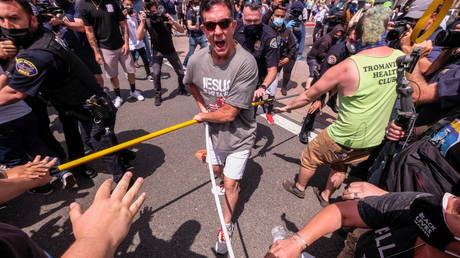 Scuffles have broken out at the site of a planned White Lives Matter rally in Huntington Beach, California, as scores of counter-protesters squared off with seperate right-wing demonstrators. Several people have been arrested.

Several dozen Black Lives Matter activists have showed up for a counter-protest in response to a rumoured ‘White Lives Matter’ rally that was expected to take place at Huntington Beach Pier on Sunday afternoon. However, only several right-wing demonstrators showed up and were immediately heckled by the crowd, run out or walked away by police, that turned out in force to prevent possible altercations.

Supporters of Black Lives Matter here at PCH & Main in Huntington Beach. This gathering is held the same day rumored “White lives” demonstrations promoted on social media were supposed to take place. . but I’m not seeing anyone who appears to be here for that. @ocregisterpic.twitter.com/s3EZmXdvil

Despite massive police presence it came to fracas between the counter-protesters and participants of the right-wing rally that was not to be, footage from the scene shows.

Counter-protesters chased after and screamed obscenities at an alleged ‘nazi’ supporters who came to the rally wearing a balaklava.

Another video shows him being detained and led away by police.

Police have also arrested a man, sporting a swastika tattoo on his arm, for assault after he pushed away an activist who stood in his way in a bid to confront him.

Another demonstrator, carrying a giant pole with an American flag and a Trump 2020 flag, was also filmed being taken away in a police car after reportedly facing off with counter-protesters who sought to rip off his flags.

This man, who was waving a flag pole with a “Trump 2020” flag among others, was just arrested at the “White Lives Matter” protest in #HuntingtonBeach. Earlier he was involved in an altercation with counter-protesters and his flags ripped down. He returned with the flags. @CBSLApic.twitter.com/fL7g9sC744

As the tensions flared up, police declared an unlawful assembly, calling on the “unruly” crowd to disperse.

The Black Lives Matter counter-protesters celebrated a victory. “We’ve got too big, we’ve got too scary. There’s too much media here. The police are’nt going to be shooting us today,” a man with a megaphone, apparently one of the organizers of the counter-action, has said, declaring that the activists “have already won this war.”

While the ‘White Lives Matter’ protest was seemingly organized on social media, police said that they failed to identify who was behind the right-wing event that caught mainstream media attention after Ku Klux Klan fliers touting the protest were spotted around the area last weekend.

Also on rt.com
Tensions high ahead of #WhiteLivesMatter rally in California: KKK and BLM expected to show up


Although California is overwhelmingly liberal, Huntington Beach has long been seen as a right-wing stronghold that has opposed Governor Gavin Newsom’s lockdown policy.