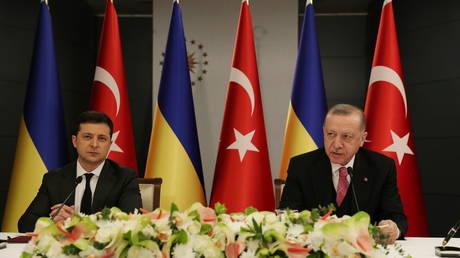 Ankara has backed Kiev’s bid to join NATO and vowed to expand defense industry cooperation as well as “coordinate steps” with Ukraine to reclaim Crimea, all while saying it does not seek to spite third countries.

“Our main goal is that the Black Sea continues to be a sea of peace, tranquility and cooperation,” Turkey’s President Recep Tayyip Erdogan said at a joint press conference following three-hour-long talks with Ukrainian leader Volodymir Zelensky in Istanbul on Saturday.

Also on rt.com
US warships set sail for Black Sea amid stand-off with Russia over military conflict in Eastern Ukraine, Turkish diplomats report


The Turkish president said Ankara does not want “escalation” in the region “in any way” and called for a peaceful resolution of a current flare-up between Kiev’s military and separatists in the Donetsk and Lugansk regions of Ukraine, collectively known as Donbass.

At the same time, a joint declaration signed by the two leaders states that Kiev and Ankara agreed to boost up defence cooperation “by competing current and developing new joint projects.”

Noting the importance of Turkish-Ukranian cooperation in the sphere, Erdogan, however, claimed that this was “not in any way a move against third countries”.


Turkey has also expressed support for the “prospect of Ukraine’s NATO membership,” and the two nations vowed to maintain security cooperation in the Black Sea region “through bilateral and multilateral mechanisms, including NATO.”

Zelensky, for his part, stated that he believes Kiev and Ankara share the same “visions” about the situation in the area, “both regarding the threats themselves and the ways of responding to these threats.”


At the meeting, Ankara has reaffirmed its long-standing policy of not recognizing the reunification of Crimea with Russia in 2014, agreeing to ”coordinate steps aimed at restoring the territorial integrity of Ukraine”, including at the so-called “deoccupation” of the peninsula. Crimea rejoined Russia following a referendum, which the West refuses to recognise.

In particular, Turkey pledged to support the so-called Crimean Platform – a sort of an international discussion forum Kiev seeks to launch to discuss the way of returning the territory.

The talks between the two presidents came amid mounting tensions in Donbass  between Kiev’s army and separatist forces, who are backed by Moscow. Shelling and gun battles resumed on the contact line, resulting in casualties reports from both sides.

The Kremlin has described the situation as “rather frightening,” while Kiev’s allies in Washington accused Moscow of amassing troops on the border with Ukraine and urged it to refrain from “escalatory” actions. Kremlin spokesman Dmitry Peskov said that Russian troop movements are part of routine relocations, and noted that Russia wants to keep a watchful eye on such “a restless place like Ukraine.”

In case full-scale hostilities break out, all nations, including Russia, would have to take measures to avert the potential bloodshed, Peskov said on Friday, adding that resumption of a civil war in Ukraine will pose “a threat to Russia’s security.”

“[1] Cohabitating While Unmarried, [2] Unfamiliarity with [Shofars], and [3] Being Silly Are All Lawful Acts” – Reason.com