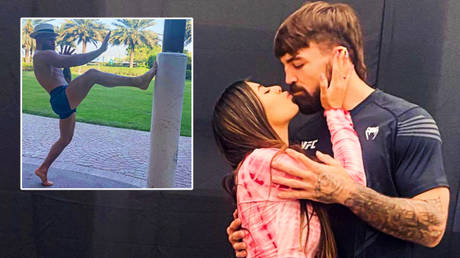 UFC star Mike Perry has been in typically provocative mood ahead of his fight against Daniel Rodriguez at UFC Fight Night on Saturday, savagely mocking Conor McGregor while admitting that “all fighters are crazy” and honoring DMX.

Unflinching welterweight Perry republished a photo posted by McGregor in which the former two-weight champ made a prediction about his third fight with Dustin Poirier, posing in a revealing outfit while appearing to face off against a section of wall.

Responding to McGregor’s claim that he would win the trilogy bout against the man who beat him in January, Perry – who is no stranger to erratic behavior himself, including a number of public brawls and a long history of bizarre social media posts – called the Irishman “hella cringe”.

“This man has lost his marbles,” wrote Perry, going on to show an unusual level of self-awareness. “All fighters are crazy and he didn’t show it until he was already rich.”

Perry also paid tribute to iconic rapper DMX, who was confirmed to have died at the age of 50 on Friday following a spell in hospital after a cardiac arrest.

“RIP DMX,” wrote Perry alongside a photo of himself at the weigh-in with Rodriguez, having gone one better than he did in his previous bout, against Tim Means in November, by making weight this time.

“I hope DMX’s spirit is feeling the love and we are all praying for him. Much love to his family.”

Regardless I hope #DMX spirit is feeling the Love and we are all praying for him. Much Love to his family. 🙏🏻🙏🏻

Having ranted how he had been “like a girl on my period on my Twitter” during an “awful” weight cut that included limiting sugar and carbohydrates, Perry sounded more enthusiastic when talk turned to his sparring with Jake Paul ahead of the YouTuber and rookie pugilist’s boxing match with ex-MMA fighter Ben Askren.

“First of all, he’s got that celeb status,” he told The Schmo of the sessions which have proved contentious among fans who feel his actions were a betrayal of MMA fighters.

“Ben Askren’s kind of carrying himself like a computer nerd. It’s really Jake Paul who’s taking a risk, putting his celeb status and all this on the line.

“He’s going to smash the dude because you can see, in the press conferences and stuff, that Ben Askren doesn’t want to fight.”

Perry confirmed that his partner, Latory Gonzalez, will continue to be part of his corner as he targets a return to winning ways that would be only his second victory in five fights.

“Can’t wait to be in your corner and watch you kill it on Saturday, babes,” wrote Gonzalez, who has given birth to Perry’s first child, a boy, since his last outing.

Also on rt.com
‘It’s not looking good for him’: Mike Perry says ex-UFC star Askren will struggle against Jake Paul after training with YouTuber