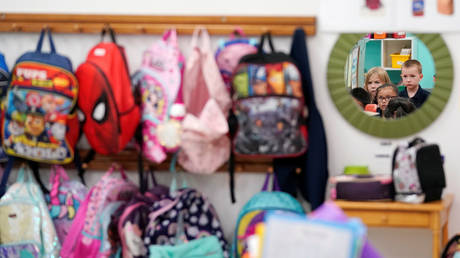 A Georgia daycare and preschool had its local franchise terminated after a photo emerged purporting to show staff serving food to white children ahead of their classmates. Skeptics argue the image was taken out of context.

The photo at the heart of the controversy surfaced online earlier this week, a screenshot taken from a live feed at a Kids R Kids location in Roswell, Georgia, set up to allow parents to check in on their little ones remotely throughout the day. The image shows a group of kids seated at tables, but only the white children appear to have been served lunch.

“They were skipping all of the black kids it seemed like,” father Adryan McCauley, who first shared the photo online and helped it to go viral, told a local CBS affiliate.

All the white kids got their lunch, and all the black kids had to wait. From the videos and pictures that we saw today, we are just completely disturbed.

It didn’t take long before the Kids R Kids corporate office waded into the issue, saying the photo is “disturbing and not in accordance with the inclusive culture that we promote” while adding that, after a review, the company had “decided to terminate the franchisee’s Kids R Kids contract and branding… leaving them to operate independently.”

However, in comments to local media, the company’s CEO and president David Vinson indicated that the scandal was overblown, but that public outrage and “cancel culture” simply forced his hand.

“I wish that everybody would be able to see the video in entirety first and not just a snapshot,” Vinson said.

While he did not clarify what the full video actually depicted, the daycare’s owner and director, Dee Gillespie, insisted the image did not “show the entire room,” suggesting it had been taken out of context.

“We believe if the parents viewed the videos they would understand. I wish they could see the compassion we have,” she said.

Gillespie could not be reached by RT for comment.

Despite the firestorm kicked off by the image, many netizens were not convinced about the discrimination charges, asking whether such a conclusion could be drawn from a single image.

Looks to me that at least one of the three adults serving the kids is black, maybe even the one in the background. Why y’all get so bent out of shape about a single picture with no context?

It’s just a photo. You gotta relax. You tripping.

Isn’t that a black women right there on the right? Is this exactly what’s going on or are we just reading into it, cuz I need to know b4 I drive my ass to sandy springs

More than one parent claiming to have sent their kids to the same daycare also weighed in with similar skepticism.

“As a mom of a child that attends this school, I am very saddened by the comments posted [online],” one commenter said, adding “The staff at this school is diverse. The assistant director is black. My son’s teachers have been primarily black.”

My kids went to that school. I never experienced anything related to this. I would like to see the video, I don’t think reasonable people can conclude anything from a photo.

Why Can't You Buy a Starbucks on the Interstate?