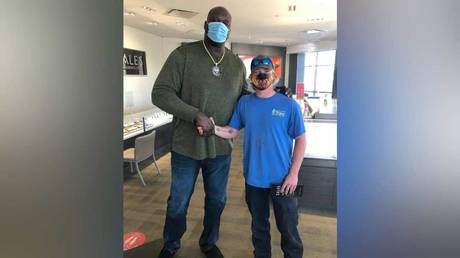 NBA legend Shaquille O’Neal has shown his generous side through buying a complete stranger’s engagement ring.

The former LA Lakers star was out shopping somewhere in the Atlanta area when he saw a man buying the item of jewelry.

With the kind act caught on camera, Shaq slips his credit card to a member of staff in the store as the recipient of his generosity is getting ready to pay.

The pair then shake hands, as the four-time NBA champion gives the stranger a pat on the back.

Last night, on the NBA aftershow on TNT, pundit Shaq was asked about the incident and told his co-hosts: “This happened yesterday. I was in Zales looking for some new earrings, and I saw a guy.”

After brushing off a few jokes about the multi-millionaire, who made almost $300 million in career earnings alone, doing his own shopping, Shaq added: “I saw the guy, he was just so shy. He was saying, ‘Hey, how much do I owe to pay off the ring.'”

The big man naturally received praise on social media for the good turn. “Shaq had absolutely no reason at all to do this and it’s like he never even thought two seconds about it,” said one Twitter user.

“He just did it. Not to be understated but doing nice things just because you can is a lost value in our society. Good on Shaq.”

What’s on your schedule today? Drive around town to find kids having fun and yell at them?

As others called him a “good dude”, an “inspiration”, and “the greatest center of all time”, not everyone was impressed.

“This is wrong. If there’s one thing you shouldn’t buy for a stranger it’s an engagement ring,” said one party pooper.

“Pay for the honeymoon and DON’T post on social media. This could embarrass the man and is just self-serving. I’m a big fan of Shaq but this is wrong.”

“What’s on your schedule today? Drive around town to find kids having fun and yell at them?,” came one reply.


Like-minded complainers claimed it was a publicity stunt set up with conveniently-placed cameras, but this isn’t a first for Shaq.

In 2019, he bought 10 pairs of shoes for a teen whose parents were struggling to afford him expensive size 18s.

Also on rt.com
‘I only saw him once’: NBA legend Shaquille O’Neal distances himself from Joe Exotic but discusses deal with Tiger King star

Tornado watch in effect for parts of Texas, Oklahoma, Arkansas and Louisiana