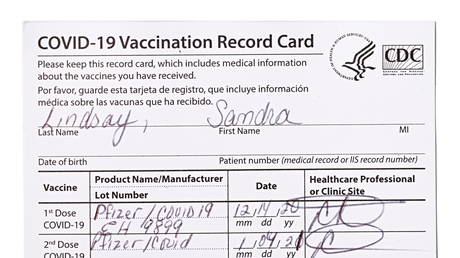 Governor Brad Little has issued an executive order banning so-called “vaccine passports” in his state. Amid a national row over the passports, Idaho is the third state to ban them.

“Vaccine passports restrict the free flow of commerce during a time when life and economy are returning to normal,” Little said on Wednesday before signing the order, which bans all government entities in Idaho from requiring proof of vaccination to receive services or enter facilities.

I signed an executive order today banning any State of Idaho governmental entity from requiring so-called “vaccine passports” – or proof of COVID-19 vaccination for citizens to receive public services or access facilities. pic.twitter.com/394lHwC5q4

Little did thank the 500,000 Idahoans who have chosen to get vaccinated, but warned that mandatory proof of vaccination “threatens individual freedom and patient privacy.”

Little’s order comes a day after Texas Governor Greg Abbott issued a similar ban, and several days after Florida Governor Ron DeSantis did the same. All three are Republicans, and state legislatures in all three states have Republican majorities.

The Biden administration has taken a dim view of red states reopening their economies. President Joe Biden accused Abbott of “neanderthal thinking” when he lifted Texas’ mask mandate last month, and his top coronavirus adviser, Dr. Anthony Fauci, appeared on MSNBC recently to caution that falling case numbers in Texas and Florida may be misleading, as well as to warn that a new surge could come after the apparent “lag.”


Biden, however, has no plans to implement a nationwide “vaccine passport.” Multiple private companies are working on their own vaccine passes, but Press Secretary Jen Psaki said last month that the White House will only help regulate any potential passes.

Neither Little’s nor Abbott’s orders, however, would penalize private companies – like airlines or restaurants – from requiring proof of vaccination. DeSantis’ order goes further, and bans local businesses from requiring such passes, ordering state authorities to cease doing business with any company that asks for them.

Idaho, a sparsely populated state of just under 1.8 million people, was spared the worst ravages of the coronavirus. The state recorded 182,000 cases of Covid-19, along with 1,900 deaths, the tenth-lightest death toll out of all 50 states. Most schools and services in Idaho remained open throughout the pandemic.

A Limited but Significant Victory for Children the Government Deems to be American Indian – Reason.com