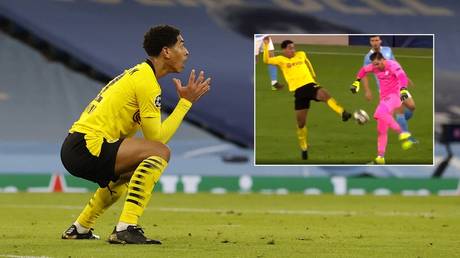 Borussia Dortmund had serious grounds to feel hard done by as the Germans had what appeared to be a perfectly good goal ruled out in their Champions League quarter-final first leg against Manchester City.

Trailing 1-0 at the Etihad after Kevin De Bruyne’s 19th minute finish, Dortmund thought they had found a way back into the game shortly before half-time when 17-year-old star Jude Bellingham beat City goalkeeper Ederson to a ball over the top, poking the ball beyond the Brazilian and into the net.

However, Romanian official Ovidiu Hategan incredibly blew for a foul before the ball was in the goal, adjudging that Bellingham had fouled Ederson in pinching the ball from his toes despite the Englishman making no contact at all.

Hategan appears to have been sold by Ederson’s theatrical flop, but fans and pundits on social media were fuming at the disallowed goal.

Former Liverpool and England ace Stan Collymore shared the incident, describing it as “embarrassing” officiating from the Romanian.

Embarrassing that this isn’t a goal by Bellingham.Just embarrassing. Struggling to understand so many decisions in the sport today. This is just not fair or right or even remotely an infringement. pic.twitter.com/VcpyU2AvzR

Elsewhere it was described as an “historically bad decision” and “genuinely appalling” – especially in an age when VAR technology is supposed to eradicate refereeing howlers of this magnitude.

A genuinely appalling decision. Nothing wrong with that from Bellingham.

Jude Bellingham has the ball in the back of the net vs. Man City… but the referee says no!The teenager robbed Ederson of the ball, but play was pulled back for a foul. @jjenas8 thinks the hosts got away with one there… 😬 pic.twitter.com/hYLhvQojxX

The official Dortmund Twitter account simply shared a series of question mark emojis, while sidelined star Jadon Sancho – deprived of the chance to face his former club due to injury – issued his disgust, writing: “This Ref needs checking!”

Even more remarkably, Bellingham was booked for the incident, on an appearance in which the English ace became the second-youngest player ever to appear at this stage of he competition.

It’s not the first time Romanian official Hategan has been involved in controversial scenes this season.

He was also the match referee when PSG and Istandul Basaksehir stormed off the pitch in protest during the Champions League group stage after claims that fourth official Sebastian Coltescu had used racially-charged language to a member of the Basaksehir coaching staff.

Police Chief Refutes Derek Chauvin’s Claim That He Did What He Was Trained to Do – Reason.com