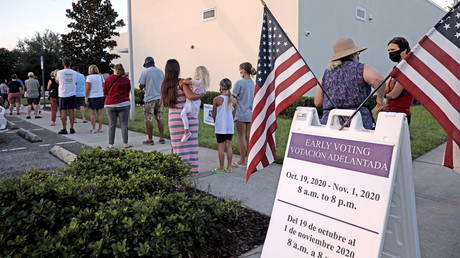 CNBC is the latest network being accused of mistaking activism for journalism, thanks to a piece calling out and shaming corporations that have not issued statements on proposed ‘restrictive voting bills’ in Florida.

Disney, Geico, Expedia and others have “backed Florida lawmakers who are now sponsoring restrictive voting bills,” CNBC journalist Brian Schwartz tweeted on Monday, adding that “since 2018 thousands of dollars have flowed from these corporations into the campaigns of Florida lawmakers sponsoring the bills.” Schwartz followed up by pointing out that the named corporations and others have not issued public comments about where they stand on multiple voting proposals in Florida.

NEW: None of these corporations responded to requests for comment on where they stand on these voting proposals. – Some of the bills were introduced as recently as March, while another was filed right after the Capitol Hill riothttps://t.co/r32CLg243p

Similar to the recent controversial voting law enacted in Georgia, the Florida proposals would put new requirements on voting, such as needing a driver’s license number or social security number to request a mail-in ballot, restricting who can drop off ballots, and adding heightened security to ballot drop boxes, among other things. Liberal lawmakers in the state have argued the proposals equate to voter suppression, while Republicans deny they would have such an effect.

CNBC’s reporting appears to call for more corporate involvement in the political process. In the article published on Monday, the network points to thousands of dollars in donations from companies like Disney to politicians sponsoring the bills, while noting that these companies did not return requests for comments and have not revealed where they stand on the issue.

Critics have been quick to pounce on the ‘reporting’, accusing CNBC of being the latest media outlet to disguise activism as journalism, essentially pushing corporations to take political sides, as companies like Coca-Cola and Major League Baseball (MLB) have done in the case of Georgia’s new voter law.

“This is bizarre why is CNBC trying to pressure corporations to take political positions?” Republican strategist Matt Whitlock tweeted.

The entire @NBCNews universe is stacked with political activists masquerading as journalists.

An apparent oversight in the piece was also pointed out by conservative political strategist Tim Cameron, who noted the coverage ignored one corporation: CNBC’s parent company, Comcast Corporation.

Why did you not include CNBC’s parent company, Comcast Corporation, in your story since they have a similar donation record to Florida politicians? Is it violation of ethics to fail to disclose this in this your story while attacking a direct corporate competitor? pic.twitter.com/INlzUx6IkK

“Comcast/NBC Universal was the 3rd highest donor according [to] the report used for your story. Disney isn’t even in the Top 25. So you attack them and leave your employer completely out of your story?” Cameron tweeted.

Comcast/NBC Universal was the 3rd highest donor according the report used for your story. Disney isn’t even in the Top 25. So you attack them and leave your employer completely out of your story? pic.twitter.com/l1sAe7aYEK

CNBC is just the latest news outlet to find itself accused of political activism. CBS News was slammed over the weekend for running a deceptively edited clip of Florida Governor Ron DeSantis, in which a reporter questioned him about grocery store chain Publix being given a Covid-19 vaccine distribution contract after they’d donated thousands to his campaign.

The clip showed a reporter accusing the governor of a “pay for play” scheme and DeSantis claiming it’s a “false narrative,” but it left out the more detailed explanation as to why the store was chosen. Multiple Democrats from the state and Publix itself have called out the reporting as false.

Before that, CBS News found itself in hot water over a tweet and article telling corporations the “three ways” they could be fighting back against Georgia’s new voting law. After being accused of political activism, the network quickly deleted the tweet and reworded its headline to say the three ways to fight back were suggestions by “activists,” rather than the network.