I wrote the first draft of my recent article for LewRockwell.com a day after Biden’s statement and Putin’s response, then revised it with later information. Overall, it was a depressing subject on the topic of war with Russia—certainly upsetting, because it seems the answer to Professor’s Cohen’s Book titled War with Russia?: From Putin & Ukraine to Trump & Russiagate, as he stated in his interviews to emphasize “War with Russia question mark” was that while the risk of war was increasing, hope remained all the same, and his book went into details for both causes of optimism and pessimism; he didn’t know the answer. However, a revised version of the book, published posthumously, will be available soon.

The reason I was not optimistic was outlined in my first article; however, even more news and videos are posted, some of which are only on YouTube (and I don’t know for how long), others such as SouthFront’s on their BitChute Channel with comments allowed or via their website.

First, this video from RT posted on YouTube; I suspect since I learned that YouTube is more popular with Russians than their own version, I think it’s called Rtube, the Russian Government does not think their account will be terminated…unless war occurs. As to the video, it discusses military measures that are being taken by the Western powers to strike against the Nord Stream stream pipeline, and how that is dangerous since Russia will respond:

The second video is from SouthFront titled “A Spring Promise Of War Dawns In Eastern Ukraine.”

SouthFront after the publication of my article, which referenced the F-35’s deficiencies from an article on their, did an entire video that seems to me a verbatim of the text, titled “A Flying Disaster: F-35B Jet Shoots Itself With Its Own 25mm Gun.”

Regarding the situation in Syria, and the transport of ISIS terrorists there and Russian Foreign Minister Lavrov’s comments on March 31st that the United States’ use of terrorists to hinder (perhaps a diplomatic term for “make impossible”) any political solution there is another SouthFront video; it is titled, “ISIS Vicious Cycle In Central Syria.”

On YouTube, Borzzikman posted two more videos; one is a little optimistic, titled “The U.S. buys Russian Oil but at the same time Frightens Europe with Energy Dependence on Moscow!”

And a much more pessimistic video, his most recent, titled “The West reacted Violently to Russian Submarines Simultaneously Surfacing through the Arctic Ice!” explains why Russia took this action to send a message to Washington and the West.

This video recently posted from the Grayzone and Aaron Maté and sadly his guest cannot be the late Professor Stephen F. Cohen:

And then today on Unz.com, The Saker became pessimistic in his article titled “Understanding Anti-Putin PSYOPs: Preparing for War” in which, focusing on the escalating situation in Ukraine, discussing how the anti-Putin PSYOP might result in war, concluded: “In other words, barring some major development, we might be only weeks away from a major war.”

But as I have shown in my prior article, there are more fronts than Ukraine: Poland might be used, Syria, and the Arctic as Borzzikman discussed. So although I am not a military analyst like the Saker, I suspect Russia will be hit from many directions on many fronts using proxies simultaneously, and perhaps direct conflict in the Arctic with America. I remember Oliver Hardy saying, “Well, here’s another nice mess you’ve gotten me into” to Stan Laurel; well, that’s where we are now. Another nice mess, thanks Washington and your minions, and to the evil one behind them all.

The question is, what can we, the people, do to stop it? Even if a dream video conversation (honestly, my dream) appeared on RT on YouTube with participants Pepe Escobar, Alistaire Crooke, Aaron Maté, Ron Paul, the Grayzone’s Max Blumenthal, Oliver’s Stone’s colleague and collaborator Prof. Peter Kuznik, Prof. Mohammad Marandi, Col. Douglas MacGregor, Ron’s pal Daniel McAdams and Lew Rockwell, what can be done?

For those familiar with my attempts at discussing the Christian faith in its oldest forms, Orthodox and Catholic, and the day I write this is Good Friday for so many in America, I’ve attempted to learn recently the doctrines and dogmas of each faith, but I am no authority. The Byzantines created the oldest surviving written commentary on the Gospels (I believe) that we have, understand the faith that can move mountains to be literal. Notice for most part all of the miracles of Jesus Christ are selfless, that is, not Marvel Comic superhero “Captain Hillary,” as Orthodox critic Jay Dyer refers to “Captain Marvel’s” blow things up “heroics” in the Marvel Comics movies.

By selfless, I mean having the power to heal, to grant forgiveness of sins. His concept of how human beings should react towards one another—to love their enemies, bless those who curse you, are as Joe Sobran noted, so different, so truly superhuman than ours. Yes, I am aware of modern doctrines and sects after Orthodoxy and even Latin or Roman faith, that, in addition to those who are aggressively hostile atheists, believe all such statements were written centuries later, as in when Jesus Christ said on the cross, “Father, forgive them; for they know not what they do,” a recent book that I discussed briefly the Protestant author (I have a feeling he had read and used Edith Hamilton’s work Witness to the Truth) wrote this statement was added years later on to obtain Roman converts! The heart of the teachings of Jesus Christ—to love God and your neighbor as yourself, to forgive enemies, to return hate with love, (not that you must never criticize within the church a Christian who has done you wrong)—is is amazing to me. I don’t trust the “modern” perspective at all. 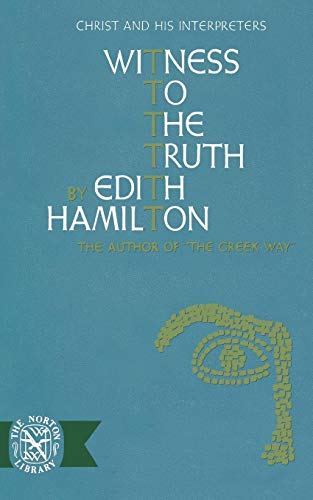 And so what is the point I make? If Jesus Christ meant faith can move mountains, by being humble and praying and trusting God, anyone who truly has repented and loves God, not just monks, might be given the power—especially if we pray together when the time comes—to move mountains, to move missiles that are less than mountains—if we have faith. Yes, that sounds totally crazy, but this is what I feel with all my heart and soul, but that doesn’t mean I’m not wrong.

Lastly, I am facing an illness, its treatment unknown to me as of today, whose prognosis is uncertain now. I should be learning more next week and perhaps later. I say this not asking for prayers, for my life as is the life of every one, is in God’s hands; I say this because I try to answer all email, but Startmail has no “Away” or “Out of Office” Microsoft Outlook feature. My fault is losing my temper and getting angry with the “Flying Spaghetti Monster” atheists who write me. Listen please: LewRockwell.com is libertarian; Lew has atheist writers, Jews, Christians Protestant, Catholic and others—just be happy in your atheism and don’t have the ill manners to try to engage me in combat. I just won’t reply now at all.

To all those of faith, keep your faith; fear not! To those who believe in the god of Darwin, enjoy the survival of the fittest. And may I wish those Christians who celebrate Easter and later in May Pascha all my best, and even give my love to my Jewish friends, Muslim and other correspondents.


The Best of Yvonne Lorenzo