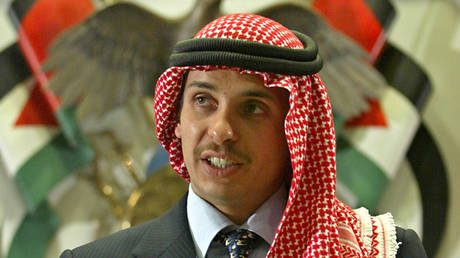 An audio statement attributed to Jordan’s Prince Hamzah, who was put under house arrest for allegedly conspiring against the royal family, says he will not stay silent – despite orders from the country’s security forces.

Prince Hamzah, a former crown prince and half-brother to King Abdullah II, was detained on Saturday and reportedly placed incommunicado, with mobile phone and internet access cut at his residence. A recording of what appears to be his voice was leaked on Monday, indicating that his isolation may not be airtight.

“I am going to escalate, and won’t obey when they tell you you cannot go out or tweet or reach out to people and are only allowed to see the family,” he said in the recording, which was reportedly circulated to friends and contacts of the disgraced prince.

The royal scion was accused of plotting with foreign forces to undermine the security and stability of Jordan. He is among some 16 people who were arrested during an operation on Saturday. The government has stopped short of accusing him of planning to topple the king – which was speculated by some to be the reason for his arrest – and indicated that it intends to resolve the situation internally.


In a video statement released by Prince Hamzah on Sunday via satellite phone, he denied accusations against him and said he had been targeted by Jordanian security for mild criticisms of the country’s policies.

“Unfortunately, this country has gone from one that was at the forefront of the region in terms of education and healthcare, in terms of human dignity and freedoms, to one in which even to criticize a small aspect of a policy leads to arrest and abuse by the security services,” he said.