Do you remember the end of Dr. Strangelove? When the Russian ambassador reveals the existence of the Doomsday device Strangelove makes the point that such weapons only have deterrent power if everyone knows about them.

Secret weapons have no ability to deter cataclysmic violence.

The reply from the Russian ambassador is one for the ages, “It was to be announced at the Party Congress on Monday.”

Remember this when we consider the curious question of the demise of Archegos Capital.

Becuse sometimes I watch something unfold and I have zero opinion on it whatsoever.  The Suez blockage was one of them.  I had to will myself to care beyond the obvious, “this is bad” reaction. The more I think about it, however, the more significant it becomes (more on that in future posts).

On the other hand, the minute I read a single article about the vaporization of Archegos capital on Moday morning I smelled a rat, or least something vaguely rat-like.  And what immediately popped into my head was this thing is important, but not for the reasons anyone will admit to on CNBC or in the financial press.

In fact, they would go out of their way to demonize Bill Hwang, the head of Archegos, who ‘acted irresponsibly,’ ‘ran a scam,’ et cetera while everyone goes into cover thine own ass mode.

The first thing that stuck out at me was who got hit.  Credit Suisse, Morgan Stanley, Nomura.  Today we can add Goldman-Sachs, Morgan Stanley, Wells Fargo, UBS, Deutsche Bank in Europe, to Nomura and Mitsubishi Financial Group. There may even be others.

Zerohedge has done impeccable work helping us to understand this story. Today’s article puts the whole thing together (which I heartily recommend you read from top to bottom… twice). The background is in this graf:

As a reminder, and as we previously discussed, we already knew how Archegos was building up stakes in its various holdings: unlike most other investors, the fund never actually owned the underlying stock or even calls on the stock, but rather transacted by purchasing equity swaps known as Total Return Swaps (TRS) or Certificates For Difference (CFD). Similar to Credit Default Swaps, TRS exposed Archegos to the daily variation margin on the underlying stock, and as such while the fund would benefit economically from increases in the underlying stock price (and, inversely, would be hit by price drops forcing it to put up more cash as margin any day the stock price dropped) it would never be the actual owner of record of the underlying stock. Instead, the stock that Archegos was long would be “owned” by its prime broker, the same entity that allowed it to enter into TRS in the first place. As such Archegos also never had any disclosure requirements, allowing it to transact completely in the dark while being fully compliant with SEC disclosure requirements – since it didn’t own the underlying stock, Archegos did not have to disclose it. Simple and brilliant.

The next thing that came out of this article that didn’t shock me in the very least is that Hwang refused to purchase any downside protection for his $100 billion Ponzi Scheme of leveraged credit lines. Clue #2

As Bloomberg adds, at several points during those exchanges, bankers implored Hwang to buy himself breathing room by selling some stocks and raising cash to post collateral. But “he wouldn’t budge.” [emphasis mine]

Now let’s get into what actually happened here.

Archegos is a Chinese family office.  The Biden administration is rapidly descending into anti-diplomatic relations with Russia, China and Iran.  Every possible provocation of the Chinese nd the Russians you can think of is happening.  On March 24th, Ukraine quietly declared war on Russia by making it Ukrainian security policy to retake Crimea (H/T to Mike Snyder at Economic Collapse Blog for finding this little goodie).

Earlier this week we have the Ambassador from the U.S. call Taiwan ‘a country’ in the worse kind of calculated offense and escalation you can think of.

So I have to ask the question, “If you were the Chinese and you were now in a hybrid war with the U.S. how would you send a message back across the Pacific?”

This state of hybrid war, in effect a proxy for a direct military World War III began with the coup in Ukraine in 2014, and has been escalating for years. The entire Trump administration was one big hybrid war exercise of asymmetric attacks on each others’ capital markets and internal domestic policies — sanctions, counter-sanctions, tariffs, currency manipulations, etc.

Would you send warships some place or would you attack our credit markets?

Or more importantly would you plant literal financial tac nukes across multiple sectors of the financial world to combat any big push from the U.S. and Europe to foment a financial crisis on the eve of a conflict going kinetic?

When we go back over the past few weeks of FOMC statements and assess the placidity of the Fed in the face of one of the biggest quarterly moves up in long-term interest rates in U.S. history we have to ask these questions. 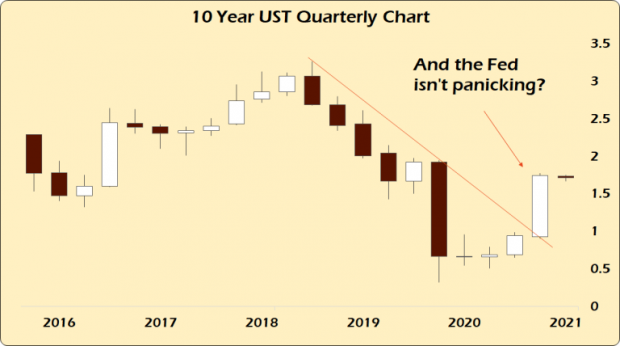 The dollar has been rising since the beginning of the year. Russia and China have been accumulating gold like mad to protect themselves from this which has been under sincere attack since last August’s flirtation with $2100 per ounce.

I’ve said before I thought this approach from the Fed was deliberate despite the markets screaming for it to do something. And when all the Fed does to change policy in March is to open up the limits banks can use to access the repo window (from $30B to $80B) while this is happening, again, I ask the question, what are they preparing for?

So, if I’m China and I’m reading the tea leaves coming from the lack of diplomatic skill, if not intentionally amateurish behavior from the Biden administration, what would I do?

How hard is it to think that there aren’t 20 or 30 family offices, unregulated and opaquely trading in CFDs and TRSs, out there with positions just like Archegos’ ready to go off if the Fed continues to allow a rising dollar and rising long-term rates.

The biggest useable weapon the U.S. has is monetary policy.  If you want to blow up China’s rising economy right now you have to allow the dollar to rise, liquidity to drop and induce panic all throughout emerging and frontier markets many of whom are now allies of Russia and China, think Turkey for example.

If you were China how would you defend against that?  By creating asymmetric time bombs that blow back on western capital markets the second the dollar begins to drain overseas liquidity.

To quote Zerohedge, “Simple and brilliant.”

In any prelude to kinetic war there is always a financial war that precedes it.  First give the world excessive amounts of easy money and allow overseas export markets to overlever to supply U.S. consumption markets, then pull the punch bowl away and watch the cheap dollars become albatrosses around their necks.

There’s been a massive correction in Chinese large caps since the dollar began strengthening in January.  As the Dow Jones Industrials climb higher, the MSCI A50 China Large Cap Index has given back nearly 40% of its gains since last March.

If I’m China, I allow Archegos to go poof and then watch the plumbing of the financial West clog up like the Suez was last week.

This is how you play the real game. And I would be shocked if this is the only family office nuclear time bomb out there.

Remember the first rule of derivatives trading: notional becomes net when the other guy can’t pay. It’s why these prime brokers were running around all weekend selling off major blocks of stock at steep discounts to avoid a deeper panic while assuring us that all is well.

In order to really play this game you have to think a couple of moves ahead.

I’m sure that Morgan Stanley, Credit Suisse and the others all thought they had these derivatives owned by Archegos properly hedged, but only if Archegos paid up. They never expected to be on the wrong side of the trade.

What if these were intentionally poison pills? The goal being to take the positions, allow market conditions to blow them up never intending to raise the capital to pay but rather leave the prime brokers of your enemy up the creek?

Because Hwang would never have gotten that kind of credit to play with to make this kind of ‘rookie mistake.’ This wasn’t incompetence on his part. Why else would he steadfastly refuse to buy himself some downside protection?

$10 billion seems a small price to pay to send that kind of message on behalf of the Chinese government.

Zerohedge is again right when it reminds us that the most likely response by the U.S. here is nothing, because to do so would invite real scrutiny as to how many of these tactical nuclear financial bombs exist and how much panic that knowledge would induce.

Which, when you think of it that way, was exactly the point of the lesson Archegos just taught everyone. The Party Congress on Monday announced this to the world.


The Best of Thomas Luongo