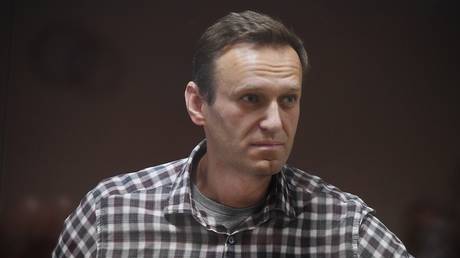 Almost half of Russians think the decision of a Moscow court in February to sentence opposition figure Alexey Navalny to over two and a half years behind bars is fair, with fewer than a third disagreeing with the judgment.

That’s according to a new poll by the Levada Center, a Moscow-based pollster and registered foreign agent. The outlet’s research also revealed that 82% of Russians have heard about the trial and the sentence, with just 17% saying they knew nothing.

Navalny was sentenced to two years and eight months in prison earlier this year. He was found guilty of breaking the conditions of a suspended sentence handed to him in 2014, when he was found guilty of embezzling 30 million rubles ($400,000) from two companies, including the French cosmetics brand Yves Rocher. Prosecutors claimed that he failed to show up when they needed to see him.

Also on rt.com
Jailed Russian opposition figure Navalny announces he will go on hunger strike, demands medication & doctor of his own choosing


At the time, Navalny was in Germany, convalescing from an alleged poisoning in Siberia last August, which he claims was ordered by the Russian government. The Kremlin denies any involvement.

Following the opposition figure’s arrest in January, over 100 cities in Russia saw his supporters take to the streets for unauthorized demonstrations.

According to the results of the survey, belief in the fairness of Navalny’s sentence is somewhat affected by the age of respondents, with 60% of those 55 and over supporting the verdict. For those under 25, the figure is almost half of that (35%). The poll also revealed that people in smaller and medium-sized cities were more likely to approve of the judgment than those from larger metropolises like Moscow.

Among those who consider the decision unfair, just 61% would like Navalny to be released as soon as possible, with 8% saying he should stay behind bars anyway.

Also on rt.com
Maria Butina, once jailed in US, visits Navalny’s prison & calls it ‘exemplary,’ but allies of Russian opposition figure cry foul


“The results of the survey suggest that the medium through which people receive information about the Navalny case is crucial for assessing events,” he said, explaining that there is a big difference between television and social media.

According to a poll from last month, Navalny is the seventh most trusted politician in Russia. March’s study, also conducted by the Levada Center, revealed that President Vladimir Putin continues to sit at the top of the pile, with 31% saying they trust him most. Navalny’s rating of 4% is lower than systemic opposition leaders Vladimir Zhirinovsky and Gennady Zyuganov, as well as prominent official, such as Prime Minister Mikhail Mishustin, Defense Minister Sergey Shoigu, and Foreign Minister Sergey Lavrov.

Last week, Navalny announced that he would be starting a hunger strike to protest his prison conditions. The opposition figure says that he is being refused proper medical care and is being tortured by sleep deprivation.