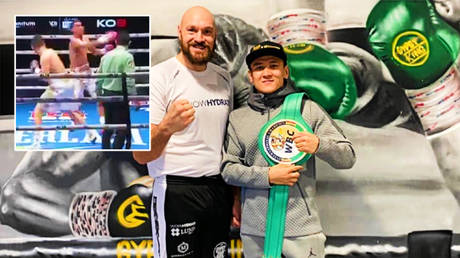 A former champion has warned that hot prospect Tursynbay Kulakhmet, who is with the same management company as the likes of WBC heavyweight world champion Tyson Fury, will struggle to find fights after a brutal quick knockout.

In the third test of his promising career, Kulakhmet clubbed previously unbeaten Heber Rondon to the canvas within the first minute of their WBC super welterweight title fight on the undercard of Carl Frampton’s defeat to Jamel Herring in Dubai.

Having succeeded with a feint jab and a right hook, the 27-year-old then mercilessly punished Rondon after the more experienced Venezuelan unwisely decided to go on the attack.

A massive right hand saw the referee immediately wave the fight off as the 34-year-old was left face down on the canvas while Kulakhmet headed to his corner to look into the camera after retaining the belt in brutal style.

This is an unbelievable few seconds of boxing. Wow.

“It was a great training camp,” said Kulakhmet, who had been working with the likes of former world champion Frampton in Manchester in the build-up to the fight and was supported by Fury before his previous win. “It was my first KO in my professional career.

“From the first day, I have been looking at the top fighters, ranked from number one to five.

“It doesn’t matter – I can’t say there is a fighter where it’s like, ‘Wow, I cannot fight him.’ The time is coming.”

Signed to MTK Global’s base in Kazakhstan and named as their best overseas fighter of 2020, Kulakhmet has been taken under the wing of former British and European champion Jamie Moore.

“Since day one, as soon as you ask him to do something, he just does it instinctively,” said Moore. “He’s a natural born fighter and he’s going to go all the way.

“Obviously, you want these type of wins because it boosts your confidence and improves the cameraderie in the gym and stuff like that, but we’re going to struggle matching him.

“Before he even came to me, the conversation was that we wanted to see him fighting for a world title between six and eight fights, so that’s how fast we want to move him. There’s still loads to work on but he’s a pleasure to work with.”

That extends to the fundamental elements of a new language over the past few weeks.

“We’re coaching him on his English as well,” explained Moore. “Every day we pick him up from the hotel, we teach him one phrase in English.”

Also on rt.com
‘He tried to hide it’: MMA fighter who lost finger wanted to go on despite severing digit via punch that left it ‘hanging by skin’