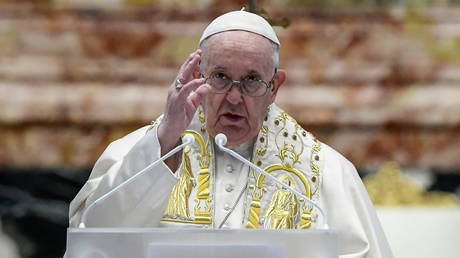 Pope Francis condemned the conflicts in Syria, Yemen, and Libya, calling for an end to the “clash of arms” in his Easter message.

In the address, Francis said it was scandalous that “armed conflicts have not ended and military arsenals are being strengthened.”

There are still too many wars and too much violence in the world! May the Lord, who is our peace, help us to overcome the mindset of war.

The Pope singled out the conflicts in Syria, Yemen, and Libya, praying, “May Christ our peace finally bring an end to the clash of arms in beloved and war-torn Syria,” and in Yemen, “whose situation has met with a deafening and scandalous silence.”


“May he inspire world leaders to curb the race for new weaponry,” Francis continued, denouncing the “insidious and horrible” landmines, saying, “how much better our world would be without these instruments of death.”

Lebanon, Iraq, Ukraine, Haiti, Myanmar, Sahel, Ethiopia, Nigeria, Tigray, Mozambique, and Nagorno-Karabakh were also mentioned in Pope Francis’ prayers, and he called on Israel and Palestine to “rediscover the power of dialogue” in order to “enable the two states to dwell side by side in peace and prosperity.”

On the Covid-19 pandemic, Francis encouraged wealthy countries to distribute their vaccines to poorer nations and prayed for those who have experienced hardship as a result of the virus.

Last month, Pope Francis made a historic trip to Iraq despite safety concerns and told Catholics he was visiting “as a penitent pilgrim, to implore from the Lord forgiveness and reconciliation after years of war and terrorism.”