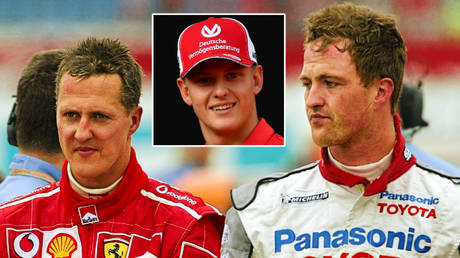 The 45-year-old has discussed his own son, David, who currently competes in Formula Three, describing the youngster as “much looser and more open than I was”.

Schumacher was just as frank when touching on his own time in Formula One between 1997 and 2007, admitting that he “might have never ended up” in F1 without the influence of his more illustrious sibling.

“I have to be honest – they opened doors to me, of course,” Schumacher told F1 Insider, accepting that the seven-time champion and their joint-manager, Willi Weber, helped him get a foot in the door.


“Would I have ended up in Opel’s Formula Three factory team without my brother? Hardly.

“Nevertheless, I had to perform. I won a race in Macau… and I won the hard-fought Formula 3000 championship in Japan in 1996, which was not easy for a foreigner.

“So I took the opportunity I was given and I think I deserved to be a Formula One starter because of my performances.”

The Schumachers remains the only pair of brothers in motorsport history to have both won Grand Prix races.

“Unfortunately, not everyone could understand that I was a brand of my own and didn’t just want to be the little brother of the big champion,” Schumacher lamented.

There were challenges along the way.“Without naming names, there was a newspaper and an illustrator, in particular, who literally blackmailed you to get to their stories,” said Schumacher, noting how journalism has changed in the era his son is racing in.

“I don’t see it that way anymore. I have the impression today that sport is much more in the foreground. The way in which the media and athletes interact has improved.”

Schumacher was impressed with his 22-year-old nephew’s first Formula One race last weekend.

#OTD in 2002 Michael Schumacher won the Brazilian Grand Prix from Ralf Schumacher & David Coulthard after Juan Pablo Montoya lost his front wing battling for the lead with Michael on the opening lap. The podium was the 100th of Michael’s career #F1pic.twitter.com/bTP0ZgCjgA

“Mick mastered his first weekend,” he said, calling the prospect’s performance “super” after he finished 16th in Bahrain.

“The numerous spins of his team-mate Nikita Mazepin [who crashed out on the first lap] have shown that the car is not easy to drive.

“That’s why Mick’s debut in the race doesn’t diminish my positive impression [of his performances].”

Meanwhile, the F1 newcomer has reiterated that he is not friends with beleaguered Russian teammate Mazepin once they are on the track, but has said he hopes to create a “family” at Haas while explaining what he most admired about his father’s racing skills.

A lot to learn still, but overall happy about the weekend with P16. Big thank you to @HaasF1Team for the hard work you guys put in to this, couldn’t have asked for a better group of people!! Looking forward to the next race🤙 #MSC47pic.twitter.com/tut7J7iaTe

“The moment we are in a race weekend when I have the helmet on, there are no friends,” he remarked to The Guardian on the eve of his maiden outing.

“Everyone is trying to get the crown and rule, if you don’t have that attitude it is very difficult.

“I loved how [Michael] handled race pace and the strategy with the team. [It’s] something I admire a lot.

“I really enjoy working with the team, getting the unity and building a family around me, which I am looking forward to at Haas. Building a relationship so we can understand each other without words.”