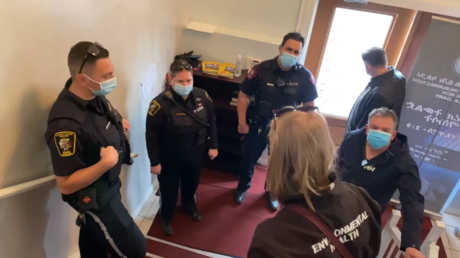 Calgary Police have been ridiculed over their official response to a scandalous Easter prayer incident in evangelical Street Church in Alberta, in which a conservative preacher chased law enforcement officers out of his property.

In their statement on Sunday night, authorities said only “one uniformed officer of the Calgary Police Service attended a call to assist our partner agencies.”

Stop. Such a weak response

Many wondered if anyone at the CPS press service even watched the video, accusing them of “lying” in the very first line of their “weak response.”

Did anyone in your PR department watch the videos or read any reports before issuing this statement?Cuz it really seems like they didn’t. I’m glad that are no other public safety issues that these 5+ officers could possibly be dispatched to.

However, while the viral video indeed seemed to show three uniformed cops (in addition to two men in plainclothes and a female Alberta Health Services employee) intruding on the premises – two of them were actually wearing a ‘peace officer’ insignia of the Calgary Bylaw services.

Also on rt.com
‘Gestapo out!’ WATCH Canadian cops chased out by enraged pastor after reportedly trying to stop Passover prayer


The statement went on to somewhat shift the blame on those partner agencies, insisting that police were there only as observers “in an effort to help keep the peace due to high levels of conflict between citizens and health inspectors.”

The organizer of the gathering was uncooperative with the health inspector, and repeatedly raised his voice asking all parties to leave the premises, which they did approximately one minute after entry and in a peaceful manner.

Calgary Police delivers the most wicked of lies on Easter Sunday. You lie even after the video has been seen by millions.

During the fiery encounter, that lasted a little longer than “a minute,” Artur Pawlowski, a controversial street preacher of Polish origin, can be heard repeatedly calling the intruders “Gestapo” and “Nazis,” ordering them to “Get out!” and “Don’t come back without a warrant!”

Didn’t like being called Nazis and having him be right, eh?

The conservative pastor is based in Calgary, Alberta, and is known locally for fiery sermons against the Sharia law, abortions, gay rights and Covid-19 restrictions.

Next you’ll be saying “I was just following orders.”

He has repeatedly been fined for organizing protests in breach of Canadian health regulations, but this time “no tickets were issued at the time and it will be up to our partner agencies to determine subsequent enforcement activity in response to this situation,” police said.

In attending public spaces, private homes, and businesses, we continue to strive for voluntary compliance with public health orders where that makes sense.