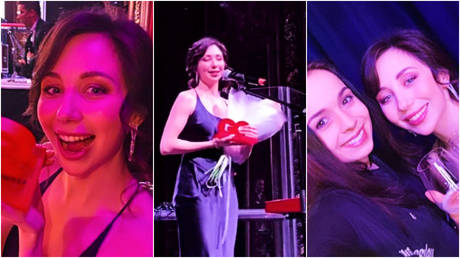 Russian figure skating queen Elizaveta Tuktamysheva has spoken up for women again after winning her second honor inside a week, donning a glitzy dress to collect an award with ice dancing pal Betina Popova at a ceremony in Moscow.

A week after leaving many of her legion of admirers in tears by scooping silver at the Figure Skating World Championships, ice extraordinaire Tuktamysheva had the altogether more straightforward task of attending a party to pick up her gong as one of GQ’s Super Women.

The men’s quarterly declared Tuktamysheva the winner of the sport category at the third edition of the honors, capping a memorable seven days for the 24-year-old after she returned in style following a six-year break from the championships.

Posing with her award while extolling luxury giants Huge Boss, Tuktamysheva told her following of more than 265,000: “[The] brand created an art installation that, like a manifesto, celebrates the uniqueness and beauty of every woman.”

“[It] translates the qualities inherent in the brand’s DNA, allowing every girl to see herself as a real boss woman. Thanks to all those who made this evening special.”

Close friend and former Warsaw Cup winner Popova accompanied Tuktamysheva to the party, picturing her being inundated with interview requests, holding a glass at a table and admiring the dancefloor.

“I want to dedicate this victory to all women in figure skating,” she wrote in the aftermath of the showpiece.

“We can do everything. Never give up – go your own way to come at the right time to the right place.”

Tuktamysheva was only beaten by Anna Shcherbakova at the championships, with Alexandra Trusova finishing third as Russia claimed a clean sweep on the podium.

Also on rt.com
‘We can do everything’: Disbelieving Elizaveta Tuktamysheva hails ‘women power’ after Russia’s dream night of world figure skating