People Have No Idea What Is Coming


People like the United States president, Bill Gates, and thousands of other politicians and people who believe in man-made global warming are seriously out of their minds. They are people who think they can defy the laws of gravity or believe the world is flat even though the world looks round from the moon or even from space stations in near orbit.

In terms of climate change, we have a reality crisis, or what is being called an “information disorder.” Joe Biden has called upon us as a nation to “defend the truth and defeat the lies,” but he is all for the lies of man-made global warming, which is ridiculous in a rapidly cooling world. I do not think there has ever been such a big lie in human history, yet the lie only gets bigger and harder to tell as temperatures decline and as growing seasons shorten.

Journalists are completely behind Biden because their livelihoods depend on playing along with the carbon scam. We all know they are lying about just about everything. They know we know they are lying when they tell us the poles are melting and that if we do not do something right now, it’s the end of the world. Or at least it will be in 12 years.

Crude language is the order of the day when it comes to deciding what is right and wrong. Joe Scarborough on live T.V. talks about anti-vaxers and those who are against vaccine passports saying they’re  “idiots, morons,” who should “crawl back in their caves.” That approximates the level of discourse on a wide range of subjects these days. Is this how we should speak about a president, that he is a moronic idiot that should crawl back in his basement? The world has lost all its sense. It is sad. It’s dangerous.

There will not be an early spring planting this year as winter will not yield to warmer weather. It’s April 1, and freeze warnings are out in Kentucky through Oklahoma, upstate N.Y. and in great parts of Europe. These are the conditions that will kill crops. And the cold fun (snow) is just starting across the entire northern hemisphere. Winter storm watches are in effect in North America, Europe, and Asia. During the next two weeks, as we move deeper into spring, snow will keep accumulating in many regions. Just the opposite of what we would expect in a warming world! You do have to be out of your mind to believe the cold, snow, and increasing ice masses at the poles are caused by warming.

“A blast of cold air is projected to slash temperatures
by 30-50 degrees Fahrenheit in much of the Northeast by
April 1,” says senior Accuweather meteorologist Alex Sosnowski.

Natural solar-driven global warming has ended. The next cooling epoch is upon us. It will be a bitch to deal with, as every Texan already knows. A month after a historic winter storm brought Texas’s grid to its knees, leaving 5+ million without power, preliminary data recently released by the Texas Department of State Health Services reveals a grim picture — at least 57 Texans lost their lives. In the future, we can expect more of the same as the grand solar minimum picks-up speed.

All-time snowfall and cold records have been and continue to be smashed across the northern hemisphere. Food prices are rising. Growing seasons are shortening. Worldwide, states and nations are beginning to ban exports on essential resources as supplies tighten, as harvests fail, and as inflation sets in. It is sad to say that the two million deaths that have resulted from the ruling elite’s mishandling of the global pandemic are only the beginning of what is to follow. There is a global catastrophe in the making, it is already baked into the cake of our collective future, and it is not just because of climate and ecosystem collapse. 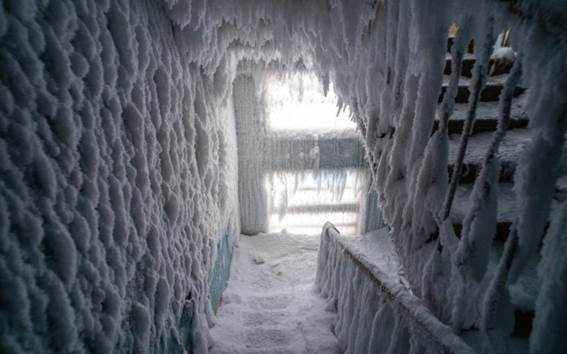 Photographer Arseniy Kotov came across an abandoned
apartment building that had frozen over, both inside and out.

Low sunspot activity during a Grand Solar Minimum plays a significant role in producing extreme “ice-age” type cold weather events across the Northern Hemisphere as we see now. Never have we seen so much snow and such bitter cold. Transcontinental Russia, Mongolia, and Kazakhstan suffered their coldest winters on record. The mercury in these nations has held below -50C (-58F) for extended periods–temps, which are among the coldest ever recorded in the northern hemisphere.

Some people conveniently forget that the sun is at the heart of everything. The historical chart below shows that civilizations flourish during times of warmth and crumble soon after the cold sets in. 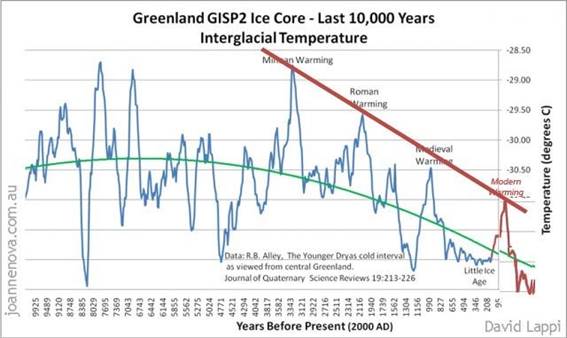 Earth is gradually sliding into its next Ice Age and has been doing so for the past 10,000 years. Today, modern civilization is on the cusp of a stratospheric fall, and it’s all to do with the Sun. Thus we can expect mass migrations of millions of desperate people, plummeting crop yields, mass starvation (U.N. already predicting this year a hundred million more than usual will starve).

When we include currency and financial failures and a devastating economic depression compounded by cold and violent snowstorms, what will most do? With politicians running around like chickens, is there any hope for us except for the protection against the government that anarchy would provide?

Fewer Will Be Able To Afford To Eat

I know everyone is feeling the pinch at the food markets. Global food prices are going up. In Indonesia, tofu is 30% more expensive than it was in December. In Brazil, the cost of local mainstay turtle beans is up 54% compared to last January. In Russia, consumers are paying 61% more for sugar than a year ago. And as Albert Edwards has pointed out, annual inflation in cereals had hit 20 percent, which represents “the highest annual rise since mid-2011 when the Arab Spring was in full flow!” If prices continue to rise like this, it is just a matter of time before we see widespread food riots worldwide.

“Climate doomsters have a perfect NEGATIVE predictive
track record – every very-scary climate prediction of the
~80 they have made since 1970, has FAILED TO HAPPEN.”

Benito Lorez writes, “We have not been prepared for any cooling that is coming. Instead, we have all been herded like cattle into the global warming pen, well, many but not all. I do not find this surprising at all as humans tend to believe a lie that makes them comfortable rather than the truth that scares the heck out of them just thinking about it. And we humans kind of have a herd mentality even if it means going off the cliff with the leader of the pack.”

Collapse Of The Climate Change Narrative

“Historic and crippling” snow in the year 2021 was considered
an impossibility under the original global warming theory.

February 2021 delivered truly unprecedented wintry conditions to the Permian Basin — the month went down as the coldest February on record (in books dating back to the late 1800s). Note: The Permian Basin is a large sedimentary basin in the southwestern part of the United States. The basin contains the Mid-Continent Oil Field province. This sedimentary basin is located in western Texas and southeastern New Mexico.

The financial repercussions of the winter-storm electricity crisis in Texas are crushing many households financially with stupendous electric bills. NBC News reports that some Texans are getting bills as high as $10,000, while local ABC News affiliate WFAA in Dallas says one man’s bill shows him owing more than $17,000. And Just Energy Group, the Canada-based retailer of electricity and natural gas that is heavily involved in Texas, announced this morning in an SEC filing that it might have lost $250 million over the few days during the “Weather Event.”

The White House staff and most of the world’s politicians have been secretly injecting delusionol. Delusionol works by activating the parts of the brain that replace cognition and reasoning with positive fantasies. Kerry said President Joe Biden knows there is “not a moment to waste” and his administration aims to put the United States on a route to cutting fossil fuel emissions in a way that is, “and I emphasize, irreversible by any president, by any demagogue in the future.” Translated, this means the present administration has serious plans to make sure the maximum number of people freeze to death in the future.

The Capital Research group writes, “NASA’s research showed that the world might be starting a long period of “cooling” based on scientific evidence regarding diminishing sunspots, which is a sign of diminished energy output from the Sun. This comes at a time that the science ignorami of the world have protest marches against global warming. Are the protests directed against the Sun?”

Tom Luongo writes, “One would think in a world which is getting hotter that putting windmills and solar panels would be a good idea. I’m sure that’s what the CEO’s of all those energy providers across Texas thought as well. And our government at every level incentivized this. The cultural zeitgeist of ‘sustainability’ and ‘renewables’ overrode, as it always does, common sense. Because at the heart of this problem is, bluntly, the planet isn’t warming. It hasn’t warmed net-on-net for the nearly twenty years Texas’ electricity market has been deregulated.”

The world has to cut carbon pollution 45% below 2010 levels to achieve the more stringent official Paris goal of limiting future warming to another half a degree (0.3 degrees Celsius) from now, U.N. officials said. This will translate into millions freezing to death.

U.N. Secretary-General Antonio Guterres called for “a red alert for our planet,” wanting all nations to reach the goal of net-zero carbon emissions by mid-century. But those same nations must translate long-term talk into the immediate action “that people and the planet so desperately need,” Guterres said.

The U.N. is a corrupt organization, and like the World Health Organization, under Chinese control. Leaked emails prove that, contrary to United Nations denials, U.N. human-rights officials did give Chinese dissidents names to the communist regime in Beijing before those activists were set to testify in Geneva against the Communist Chinese Party’s abuses.

The latest data point from the Finish Meteorology Institute’s (FMI’s) “Total snow mass for Northern Hemisphere” chart shows hefty increases, some 700 Gigatons above the 1982-2012 average. Instead of much less snow, as predicted by global warming theory, we have much more snow, which is what we would expect for grand solar minimums that hold the potential to create mini-ice ages or even a full-blown ice-age. Mini ice ages are typical in history, and that is what is predicted. That is what happens, vastly increased snow cover that does not melt in the summer.

Reprinted with permission from Dr.Sircus.com.


The Best of Dr. Mark Sircus