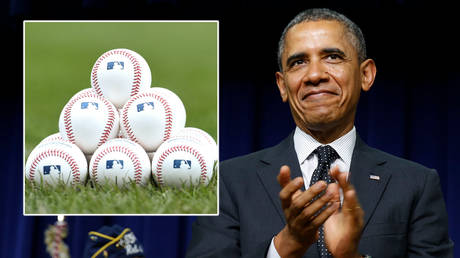 Ex-US president Barack Obama has added his considerable weight to Major League Baseball’s (MLB) decision to remove the annual All-Star game from the state of Georgia – hours after Donald Trump called for a boycott of the sport.

Obama waded in to the row over voting reform law in the state, which members of the Democrats argue is aimed at suppressing African-American voters, most of whom are supporters of his party.

Among other measures, the reforms would limit mail-in voting and even criminalize giving food and water to people waiting in line to vote.

“Congratulations to MLB for taking a stand on behalf of voting rights for all citizens,” Obama, a frequent sparring partner of Trump’s, wrote on Twitter.

Congratulations to @MLB for taking a stand on behalf of voting rights for all citizens. There’s no better way for America’s pastime to honor the great Hank Aaron, who always led by example.

“There’s no better way for America’s pastime to honor the great Hank Aaron, who always led by example.”

There has been little to no middle ground when it comes to Georgia’s new voting mandates, with Democrats blasting the measures as voter suppression tactics that particularly affect minorities, while Republicans have pushed back, arguing that the law was needed to ensure election integrity.

President Joe Biden already likened the law to “Jim Crow in steroids,” while former President Donald Trump blasted the MLB and other organizations for protesting Georgia, telling his supporters on Friday to “boycott baseball.”

Obama has predictably earned praise from liberals critical of the law, and also triggered critics accusing him of race-baiting on an issue that has nothing to do with race.

I like that Biden is ordering a boycott against a state that voted for him.

Maybe MLB can move the All-Star game to President Biden’s home state of Delaware, where there is no early in-person voting. (Georgia has 17 days of it with new law, including two Saturdays)

Obama’s backlash prompted Trump to leaf through his well-worn playbook one more time.

“Baseball is already losing tremendous numbers of fans,” he said in statement, mirroring comments he made about several other sports, news networks, late-night talk shows and even Meryl Streep during his one-term presidency.

“Boycott baseball and all of the woke companies that are interfering with free and fair elections. Are you listening Coke, Delta and all?“

Coca-Cola and Delta are among two of the major brands who have also expressed concern with voter reform in Georgia, which was passed by Republicans after Joe Biden won the state in November’s presidential election and the Democrats won two run-off Senate elections in January.

Tucker Carlson, the conservative mouthpiece whom many see as Donald Trump’s political heir in the conservative movement, also lashed out at the league’s stance, saying that the MLB believes it has “veto power over the democratic process“.

He added that Biden was “willing to destroy even something as wholesome as the country’s traditional game purely to increase the power of his political party“.

The MLB Players’ Union, meanwhile, has resoundingly endorsed the move, with former New York Yankees great Derek Jeter throwing his influence behind it.

.@RealClearNews‘s @PhilipWegmann asks Jen Psaki if the Biden White House is so adamant about having MLB move its All-Star Game from Georgia because of the voting law, why aren’t they calling for a boycott of the 2022 Winter Olympics in Beijing?!Psaki did NOT like this question. pic.twitter.com/1GbTxRsmhC

“We should promote increasing voter turnout as opposed to any measures that adversely impact the ability to cast a ballot,” Jeter said.

“We support the commissioner’s decision to stand up for the values of our game.”

While the cancelation of the All-Star game from Georgia won’t rob the state of any economic benefits – the game would likely have taken place with limited fans present – some concerns have been raised as to how fans who count themselves on the right of the political spectrum might react.

Tensions have been particularly high since the NFL and NBA both embraced the wave of ‘Black Lives Matter’ social protests that have emerged since the killing of George Floyd last summer.