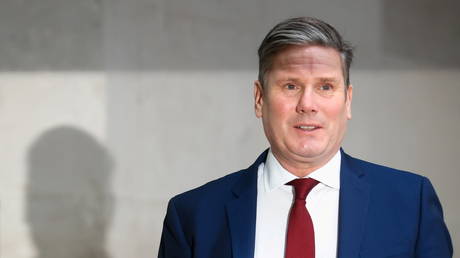 Keir Starmer landed in hot water after visiting a London church of Nigerian origin to highlight Labour support for BAME rights. The pastor of Jesus House vocally opposed the UK’s ban on discrimination against gay people.

Starmer, who will soon mark his first year at the helm of the Labour Party, took a trip on Good Friday to Jesus House for All The Nations church in northwestern London. He called it a “wonderful example of a church serving its [predominantly black] community,” before bringing up the way Black, Asian and Minority Ethnic (BAME) people suffer from Covid-19.

“After this, there can be no return to business as usual. It’s been great to meet young people and church leaders here at Jesus House to talk about how to address inequalities and injustices that this crisis has so brutally exposed,” he said in a video statement.

I recently visited @JesusHouseUK to hear about their crucial work in the community.Churches across the country have played such a vital role in the fight against the virus.I hope everyone has a good, restful and safe Easter weekend. pic.twitter.com/CyJfaxRoph

However, the photo op spectacularly backfired online. Jesus House is well known in some parts of British society not for the good work it does for the BAME community but for its negative attitude to gay people. In fact, just four years ago, Tory politician Theresa May, who was prime minister at the time, was blasted by LGBT activists for a similar visit to the same church.

Jesus House is part of the Redeemed Christian Church of God (RCCG), a Protestant church of Nigerian origin with branches throughout the world. Critics say the RCCG is involved in the controversial practice of ‘conversion therapy’ – attempts to alter the sexual orientation of gay people. LGBT activists in the UK see it as cruel and barbaric and want to see it banned, but some religious groups oppose such a ban, saying it would restrict religious freedoms and may lead to persecution of church leaders.


Pastor Agu Irukwu, the head of Jesus House London, was among the religious figures who opposed the passage of legislation in 2006 which outlawed discrimination on grounds of sexual orientation. He was a signatory of an open letter that accused the Labour government of Prime Minister Tony Blair of “discriminating against Christians in order to appease minority groups” and lamented that the proposed regulations would force churches “to accept and even promote the idea that homosexuality is equal to heterosexuality.” In 2013, the pastor signed a letter against the proposed legalisation of gay marriage, which was passed and replaced the institution of civil partnerships for same-sex couples in the UK..

With baggage like this, it’s no surprise that LGBT activists pounced on Starmer for his church trip. Whoever chose Jesus House despite the fallout from May’s visit there being relatively fresh in public memory got their share of criticism as well.

This church is nowhere near your constituency so it seems you have gone out of your way to visit an extremist, homophobic church.

Political advisors must have the best Union reps on Earth.How are none of them ever fired?!Undermine lockdown in a pandemic? 40k pay rise!Let the Party leader praise a homophobic church that pushes ‘conversion therapy’ aka torture & keep the tweet up for a day?! No problem!

For what it’s worth, Labour’s own LGBT campaign gave the leader its stamp of approval after his detour. They said they were “satisfied” that Starmer personally and the party in general “are determined to ban conversion therapy and achieve equality for LGBT+ people.”

We have spoken with the Leader of the Oppositions’s team regarding his visit to a church on Good Friday that does not align with our values on conversion therapy or LGBT+ equality. pic.twitter.com/qSOJWmYGos