Biden may not be able to ease US-Russia tension, and he’s not best friend of ‘competitor Europe,’ veteran German diplomat warns 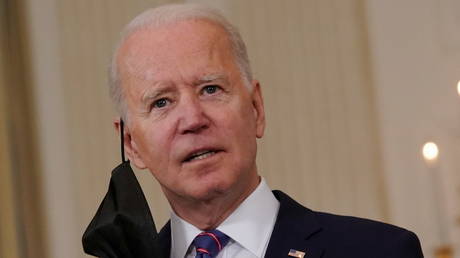 “Dogmatic” Democrats controlling the White House means the US will unlikely get along with Russia under President Biden, German ex-diplomat Frank Elbe told RT, adding that it’s also not the time for Europe to let its guard down.

Relations between Russia and the US have become increasingly “hostile,” and it’s time for the two nations to return to “cooperation” before the world finds itself on the brink of a nuclear war, Elbe, Germany’s former ambassador to Poland, India, Japan and Switzerland, told RT DE in an interview recorded this week.

“The bomb, it is still there, just as it was in 1962, during the Cuban Missile Crisis,” Elbe said, arguing that the world powers are “bound” to pursue “sensible” policy in relations with other nations to avoid a potentially devastating conflict.


“There is basically no alternative to a policy of cooperation aimed at building trust,” the veteran diplomat believes. However, Elbe worries there is a risk the confrontational trend in relations between Moscow and Washington will not be reversed under the Biden administration.

The Democratic Party is known for its “very dogmatic tendency” to be very “stand-offish” in its relations with Russia, he noted. Of particular concern is the fact that the two sides are seemingly losing all semblance of respect towards each other, even when it comes to diplomatic language, the former ambassador said.

“There is a great deal of insult in relations between the East and the West,” Elbe said, adding that it is “not the language” he remembers from some 30 years ago when reconciliation between Washington and Moscow partially paved the way for Germany’s reunification.

Breaking this spiral of escalation is still possible, the diplomat said, as he praised Biden’s decision to invite Russia and China to the global talks on climate. Working together on a global problem could help both sides develop a more “balanced” policy, at least in terms of the language of diplomacy, he added.

Also on rt.com
Relations with US at rock bottom after Biden’s ‘killer’ jibe, Moscow says – but American diplomats insist it’s all Russia’s fault


‘Americans do not particularly love Europe’

Europe, in turn, should not unquestioningly treat Washington as an ally, just because a new American administration has taken office, Elbe warned.“Americans are important partners for us,” he said, adding that at the same time the US itself might well “see us as a competitor that stands in their way.”

Europe needs a “united front” in its dealings with the US, which should involve an understanding of the fact that “Americans do not particularly love Europe,” Elbe said. It might be the time to consider whether NATO is still “viable” in its current form, he added.

The most “sensible” course of action for Europe would be to maintain a “reasonable” partnership with both Russia and the US, the veteran diplomat said, adding that German politicians in particular should not forget that most Germans “want a better relationship with Russia.”

Also on rt.com
Kremlin says situation in Donbass ‘frightening’ as Ukraine calls on NATO & Washington for support in event of conflict with Russia


His comments came just as the German Defense Minister, Annegret Kramp-Karrenbauer, justified her nation’s growing military expenditure with a persistent Russian “threat,” amid continued US “expectations” of its allies in Berlin.

Kramp-Karrenbauer, often referred to as AKK in Germany, claimed that pouring more money into Germany’s military “was never about doing the US a favor,” as she spoke with German news agency RND. She argued it was “about our own safety and our own interests,” pointing to the “growing challenges” Berlin faces, including those she said Russia and China pose.

AKK admitted that there are “expectations” of Germany in the US that “continue to exist” and that they are not dependent on a particular political party that is currently in power. She also said that Germany is likely to see some “pressure” from Washington in future, even though the withdrawal of American troops from German soil, ordered by then-president Donald Trump, is now apparently off the table.