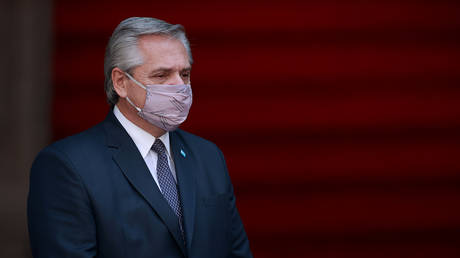 Argentinian leader Alberto Fernandez has most likely been infected with the new coronavirus, he announced. The virus should not affect him severely, however, as he has previously received the Sputnik V vaccine, researchers say.

President Fernandez “performed an antigen test which was positive,” and has been awaiting further confirmation of his state of health having had a PCR test, he wrote on Twitter on Saturday.

Fernandez, who turned 62 just a day before, said he had a “slight headache” and fever, but reassured the Argentinian people that he was “physically well” and “in good spirits.”

Replying to his tweet, Russia’s Gamaleya Institute, which developed the Sputnik V vaccine, said, if the infection was confirmed, the president’s recovery should be quick, and he should not experience any severe symptoms. “Sputnik V is 91.6% effective against infection and 100% effective against severe cases,” they explained, wishing Fernandez a speedy recovery.

Alberto Fernandez was among the first world leaders to have been injected with Russia’s Covid-19 vaccine. Sputnik V is officially approved and registered in Argentina, which signed a deal with Russia to purchase millions of doses of the vaccine.


He has previously said that Sputnik V, the world’s first registered vaccine against the coronavirus, fell victim to a smear campaign as a result of trade wars and politics. “There are political sectors that inform or misinform, and use this vaccine as part of their game,” he said.

Argentina has been hit hard by the deadly virus, with some 2.37 million people having been infected. Over 56,000 Argentinians died of the new coronavirus during the pandemic. This year, nearly 700,000 people, mostly health workers and elder people, have been fully vaccinated.