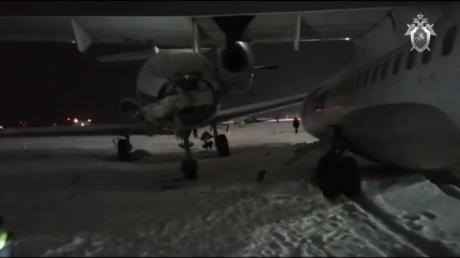 A passenger plane in the Russian city of Surgut crashed into another after it started moving while undergoing maintenance. Both aircraft suffered mechanical damage, but neither had passengers or crew members on board.

Surgut is located around 2,000km north-east of Moscow, and is the largest city in the oil-rich Khanty-Mansi region. Its airport handles almost two million passengers every year, with regular flights to both domestic and international locations.

Late on April 1, a plane owned by the popular airline Utair was undergoing maintenance, with its engines running, when it started to move forward and collided with a jet from the small regional charter operator Skol. The Utair plane is an ATR-72, produced in France and Italy, whereas the stationary aircraft is a Soviet-designed Yakovlev Yak-40.

In the video, it appears that both aircraft sustained serious damages at the front end.

Both the local Investigative Committee and the airline UTair are investigating the crash, but the prosecutor’s office has said that it is blaming a failure of the ATR-72’s braking system.

Last year, on the day international flights resumed following a hiatus caused by the Covid-19 pandemic, a fuel truck at Moscow’s Sheremetyevo airport collided with an Airbus A321. Luckily, there were no passengers on board in that incident, either.