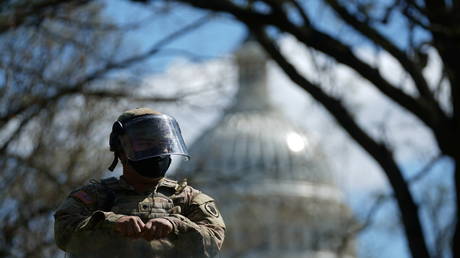 The driver of the car that rammed a barricade outside the US Capitol has died in hospital, along with one of the Capitol Police officers injured in the incident, officials have confirmed.

A car smashed into the barricade on Constitution Avenue, on the northeast side of the Capitol complex, on Friday afternoon and injured two officers. The driver emerged armed with a knife and was shot by Capitol Police.

All three were taken to hospital, but the suspect has since died, police officials confirmed in a press conference.


One of the injured Capitol Police officers is reportedly in a critical condition.

The Capitol went into lockdown over the incident. Journalists at the complex filmed both the scene of the crash and a US Park Police helicopter touching down on the lawn outside the east entrance.

National Guard troops equipped with riot gear were quickly dispatched to the area. Congress is currently on Easter recess and the legislators are not expected back in Washington until April 12.

Friday’s incident is the first serious security threat to the Capitol since the January 6 riot, when a crowd of supporters of President Donald Trump interrupted the joint session of Congress meeting to certify the election of Democrat Joe Biden as president.

Some 25,000 National Guard troops were deployed to safeguard Biden’s inauguration and the Capitol from “threats” that never materialized. Several thousand remain in Washington, DC to this day. An outer perimeter fence topped by razor wire was only recently removed from around the Capitol.