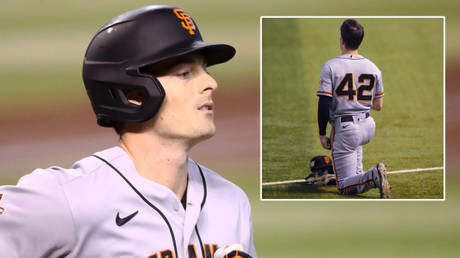 San Francisco Giants outfielder Mike Yastrzemski has reversed his decision to take part in the wave of Black Lives Matter-backed anthem protests in the US, telling reporters that he feels like he has already “made that statement”.

Yastrzemski, who is the grandson of Boston Red Sox icon Carl Yastrzemski, was among the throngs of sports stars to take part in the fiercely divisive pre-game protests which have been commonplace in most major sports leagues in the country, sparked by the death of George Floyd last May.

The ensuing social justice protests, which were initially popularized by former San Francisco 49ers quarterback Colin Kaepernick in 2017, have since bled into various sports outside of the United States – with numerous sportspeople across the globe taking part in the ongoing ‘Black Lives Matter’ campaign, which organizers say was designed to highlight racial inequality in sport and society as a whole.

“The United States Flag represents to me the ultimate sacrifice that a man or woman can make,” said Yastrzemski last summer, explaining his decision to kneel during the national anthem to fans.


“They have made the selfless decision to devote and risk their life for the protection, peace and freedom of our country. For them, I will always cover my heart and be forever grateful.

“By kneeling last night, I wanted to hold myself – and, hopefully, others – accountable that something needs to change.

“I am willing to be part of the change because we all deserve the freedom that our veterans and active members have sacrificed their lives for.”

Mike Yastrzemski says he will stand for the anthem this season. He knelt last year to spark conversation and awareness and let people know where he stands on racial justice and feels he’s made that statement.

However, as time has gone on more and more athletes have begun to rail against the act – Yastrzemski included.

The 30-year-old told reporters on Thursday that he will no longer kneel prior to the start of games, instead standing to respect the anthem.

According to MLB beat reporter Andrew Baggarly, it is because Yastrzemski is satisfied that he has already “made that statement“.

“Mike Yastrzemski says he will stand for the anthem this season,” Baggarly announced in a tweet.

So, he’s now fine with thing as they are.

“He knelt last year to spark conversation and awareness and let people know where he stands on racial justice and feels he’s made that statement.”

Reaction to Yastrzemski’s new stance on the issue was predictably varied.

“So, he’s now fine with thing as they are,” wrote one baseball fan in response, with another adding that his move was “very disappointing“.

A third, though, was fully in support of Yastrzemski’s decision, writing: “Good for him.”

The debate mirrors a wider malaise over the gesture that seems to be taking hold across sport, with several teams opting to move away from the pre-game kneeling rituals in favor of other types of protest.

Earlier this week, both the Czech Republic and Poland international football teams announced that they wouldn’t be kneeling in advance of games against Wales and England respectively, with the Polish team instead pointing to a badge on their sleeves which read “UEFA Respect“.

“The whole kneeling down – why must I kneel down for you to show that we matter?” Zaha told the On The Judy podcast.

“Why must I even wear Black Lives Matter on the back of my top to show you that we matter? This is all degrading stuff.”

Also on rt.com
‘The last topic to interest us’: Poland refuse to take knee vs England after comments by football boss

Rebel Yells, But You’re Likely to Yawn in Response – Reason.com