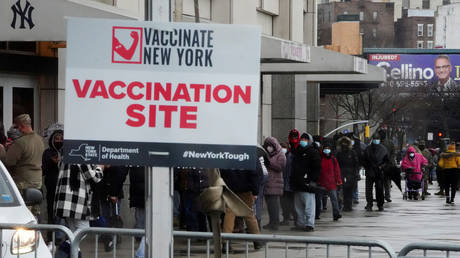 CNN medical analyst Leana Wen sounded the totalitarian alarm, warning that Americans may take back their pre-pandemic freedoms without being vaccinated if the Biden administration doesn’t quickly make the jabs a precondition.

“We need to make it clear to them that the vaccine is the ticket back to pre-pandemic life,” said Wen, who was previously president of Planned Parenthood, the largest US abortion provider.

Wen lamented to CNN host Chris Cuomo that many states have begun to fully reopen their economies and remove Covid-19 restrictions, leaving a “very narrow window” to tie normalization of everyday life to vaccination status.

“Because otherwise, if everything is reopened, then what’s the carrot going to be?” Wen asked. “How are we going to incentivize people to actually get the vaccine?”

So that’s why I think the CDC and Biden administration need to come out a lot bolder and say, ‘If you are vaccinated, you can do all these things. Here are all these freedoms that you have.’

The troubling alternative, Wen added, is that “people are going to go out and enjoy these freedoms anyway,” which will leave the US vulnerable to a new surge of Covid-19 infections next fall. Wen’s comments come amid a global controversy over the so-called ‘vaccine passports’ that require citizens to show proof of their Covid-19 vaccinations to be able to access anything from sporting events to airline travel to shopping. Florida Governor Ron DeSantis on Friday signed an executive order banning vaccine passports to block creation of a two-tiered society with first- and second-class citizens based on inoculation status.


The CNN medical pundit’s authoritarian take on public health was chilling to many observers. “Unbelievably scary,” former acting Director of National Intelligence Richard Grenell said. “They think we get our freedoms from the government.”

No issue is more important than stopping these authoritarian psychopaths from implementing their digital vaccine passport system. Turning America into a two tiered caste system, where everyone is tracked & traced like in China, would forever alter our countries DNA for the worse. https://t.co/jO2YucemIQ

Republican strategist Andrew Surabian also was among those who were alarmed by the segment. “No issue is more important than stopping these authoritarian psychopaths from implementing their digital vaccine passport system,” he said. “Turning American into a two-tiered caste system, where everyone is tracked and traced like in China, would forever alter our country’s DNA for the worse.”

No Qualified Immunity for Cop Who Shot and Killed a Suicidal Man, Says Federal Court – Reason.com