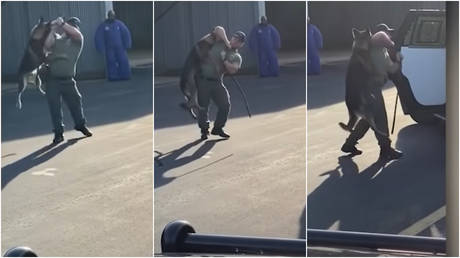 A North Carolina police officer who was caught in viral footage beating and body-slamming his own K-9 companion has left the force, stepping down on his own accord after the department took action to have him fired.

Officer James Hampton of the Salisbury Police resigned this week over the controversial footage, the department said in a statement on Wednesday, noting that it had recommended termination after an internal probe into the video, which shows Hampton roughing up his police dog, Zuul.

“In an effort to restore and maintain the public confidence that has been detrimentally affected by this incident, the Salisbury Police Department would like to share that Officer James Hampton was K-9 Zuul’s handler, and was the officer depicted in the video engaging in inappropriate discipline of Zuul,” the statement said.

The Police Department’s review determined that Officer Hampton had acted in a manner entirely inconsistent with his K-9 training and had violated Police Department policy. As a result, he was recommended for termination.

The department went on to say that Hampton left the job prior to any formal disciplinary action, adding that while it understood public outcry for his immediate firing, it was required under city regulations to provide the officer due process to ensure “fairness for everyone involved.”

Obtained by a local Fox affiliate earlier this month, the controversial video shows Hampton, a K-9 handler, hoisting Zuul over his shoulder by his leash, proceeding to slam the animal into the side of his squad car and appearing to strike it once after it was pushed inside.

At one point in the video, someone at the scene is heard saying “We’re good; no witnesses” as Hampton forcefully dragged the four-year-old pooch into his vehicle, apparently believing he was not being filmed. Other voices in the footage, ostensibly of fellow officers, are also heard asking “Is your camera on?” before another voice answers, “No, my power’s off.” Another voice then chimes in saying, “I think mine’s on. Can you go flip my cameras off?”

None of the men objected to Hampton’s aggressive treatment of the animal.

The video prompted intense backlash online, with some netizens all but begging major media outlets to bring attention to the story in order to “get this officer fired” before his resignation.

This thing with the Salisbury police abusing their k9 unit has me a special kind of furious and discouraged. What kind of rot is degrading human souls so ubiquitously?

@CNN please do story on this officer of the Salisbury NC police abusing k9. We need attention to get this officer fired. https://t.co/C94rymE3hi

“Dogs do their best to please and to understand what is required of them, and they’re extremely loyal,” the group said. “The cruelty inflicted on the dog in the video is a violation of that trust and, PETA believes, North Carolina law.”

PETA also noted that while Salisbury police said Zuul was seen by a vet on March 4 and given a “clean bill of health,” the footage in question was reportedly filmed months before it became known to the public, suggesting the dog was not given a proper check-up immediately after the incident.

Also on rt.com
K-9 officer fired after shooting ‘aggressive’ Chihuahua in the face in front of stunned carer