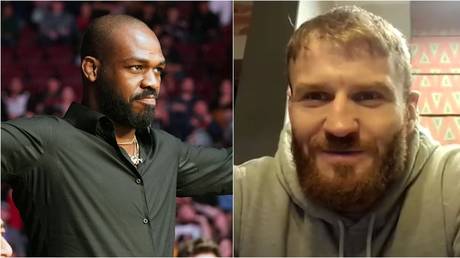 Danny Armstrong is a Moscow-based British journalist, reporter and presenter for RT Sport. Follow him on Twitter @DannyWArmstrong

Blachowicz scored a career-defining win over the middleweight champ and heavy favorite to become a two-division ruler Israel Adesanya at UFC 259, which finally garnered him some long-awaited praise in the mixed martial arts world and entered him into the top 10 pound for pound rankings.

The 38-year-old Pole has chased a fight with Jones before, and the latter promised a fight after Blachowicz’s KO win over Corey Anderson in their rematch in February last year, only to vacate the belt in August after citing a salary dispute with the UFC and a desire to compete north of 205.

In an interview with RT Sport from his home in Poland’s capital of Warsaw, Blachowicz said he would have “no problem” meeting Jones either side of 205 lbs, and revealed who is immediately next in line for a shot at his title.

“You know, I can meet him at 205 or at heavyweight. I don’t care. So I’m just waiting, you know, for the next fight, for the next decision. If the UFC gives me you know, Jon Jones I would be happy. If not, I’ll be happy with my next opponent,” Blachowicz said.

“I think my next opponent will be Glover Teixeira but we will see. But if Jones Jones he would like come back to… if but you know, I think he will stay at the heavyweight. But if he changed his mind. I mean, I’m waiting for him. No problem.”

The win against Adesanya went some way to legitimizing Blachowicz’s light-heavyweight reign, as some reckoned his KO win over Dominick Reyes to win the belt to be somewhat fortuitous and lead many spectators, including respected UFC

After Francis Nagannou’s recent thunderous knockout of heavyweight champion Stipe Miocic at UFC 260, Dana white joked it was time for Jon jones to start moving down to the middleweight 185lbs division, but the man himself remained defiant his weight gain would not be in vain and instead would push for a $10m pay day with the newly-crowned Cameroonian.

Despite earlier stating that  he “did not understand” Jones’s decision to move up to heavyweight, Blachowicz thinks there may be some logic in the 33-year-old former champion’s plan.

“That was, just you know something like this. And then he come back to maybe he will come back to 205 we’ll see.

READ MORE: ‘So quick to jump on a hype train’: Jon Jones trolls Israel Adesanya as star falls short against Blachowicz at UFC 259

Jones looks like he has his gaze firmly fixed on meeting Ngannou, but has called the proposed $10million evaluation of the offer to face the Cameroonian “way too low”.