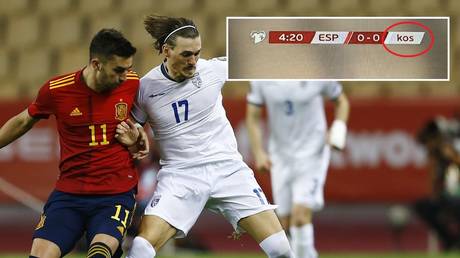 Spain was accused of taking a subtle swipe at Kosovo – which it doesn’t recognize as an independent country – by failing to capitalize the name of their opponents during a World Cup qualifying clash on Wednesday night.

Meeting in Seville for a Group B match in the battle to reach the Qatar 2022 tournament, Spain ran out 3-1 winners against their less-fancied rivals from the Balkans.

While the football was entertaining – including a spectacular long-range effort from Kosovo’s Besar Halimi – it was the political backdrop to the game which set tongues wagging on social media.

Spain are among the nations not to recognize Kosovo, the breakaway region which declared its independence from Serbia in 2008, and which was welcomed into the FIFA and UEFA fold in 2016.

The issue is a thorny one for Spain as they remain concerned over similar breakaway threats from Catalonia the Basque community in their own country.

Prior to this week’s match in Seville, Kosovo had vowed to withdraw if their anthem and national symbols were not respected by their opponents.

Spain later promised to hold the game “in line with the FIFA and UEFA rules and protocol,” and played both anthems before kick-off – although still appeared to make their stance clear through some subtle gestures towards the visitors.

That included the national Spanish TV broadcaster refusing to capitalize Kosovo’s abbreviated name when shown on screens around the nation.

Spain’s Public TV is a joke. Writes Kosovo in lowercase letters vs Spain in capital letters during tonight’s match. 😤😤😤🐂🐂🐂 pic.twitter.com/P4w5PPhbtH

The match graphics from the Spanish football authorities on their social media accounts also included the hosts’ name all in capitals, while not affording the same treatment to their guests.

During the game, commentators were heard referring to the Kosovo team in a variety of ways.

The linguistic tactics had even begun before the match started, with one Spanish journalist appearing reluctant to utter the name of his team’s opponents when addressing their coaching staff.

Some claimed that Spain were being “petty” for resorting to the step, while Spanish football writer Colin Millar claimed it was “ironic” given Spain’s role in bombing Yugoslavia back in 1999.

International broadcasts, meanwhile, showed Kosovo’s abbreviation in all uppercase letters for the match.

Because Spain does not recognise Kosovo independence, their name is being written in lower-case letters for tonight’s game. Beyond petty. pic.twitter.com/zIJcBgtSTz

Others, though, pushed back and supported the stance, with one person writing: “The correct letters are SRB,” adding a Serbian flag.

The correct letters are SRB 🇷🇸

On the pitch, Luis Enrique’s Spain team won 3-1 thanks to goals from Dani Olmo, Ferran Torres and Gerard Moreno. Kosovo’s spectacular reply from Halimi came when they were already 2-0 down.

Spain top the Group B standings with seven points from three games, while Kosovo are bottom of the table with two defeats from two matches.

Two other nations in the group – Greece and Georgia – also do not recognize independence for Kosovo. Russia is among the states which holds the same stance.

Back in 2018, Spain was stripped of the right to host the European Junior Weightlifting Championships over its non-recognition of Kosovo, while the following year UEFA moved qualifying games for the Under-17 European Championships from the country due to the same issue.

Winter blast moving through eastern US