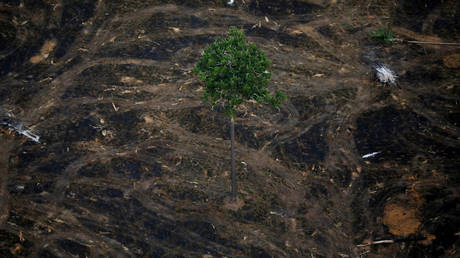 The world experienced a “climate emergency” in 2020, as deforestation increased 12% on the previous year, despite the global slowdown caused by the Covid pandemic, according to a newly released report by Global Forest Watch (GFW).

Brazil was the worst impacted area, losing 1.7 million hectares of primary forest alone, three times greater than the next highest nation, the Democratic Republic of the Congo, which saw 490,000 hectares wiped out.

Frances Seymour, from the World Resources Institute (WRI), which runs the GFW, declared that the level of deforestation is a “climate emergency,” stating that the findings are “a biodiversity crisis, a humanitarian disaster, and a loss of economic opportunity.”

Nature has been whispering this risk to us for a long time. But now she is shouting.

While the Covid pandemic did have some impact, the report outlines how it failed to significantly reduce the destruction of forest landscapes and the natural world.

Also on rt.com
Scientists produce new ‘Map of Life’ which they claim shows where species unknown to science may be found


Researchers fear that attempts to boost economic growth post-pandemic, as nations seek to recover financial losses, could see deforestation accelerate even further, suggesting the 2020 report is sending an “ominous signal” about what is to come.

GFW monitors forest cover using web applications, satellite technology and user-gathered information, to provide real-time information on and insights into the impact of the changing environments.

Republicans Want To Take Your Guns