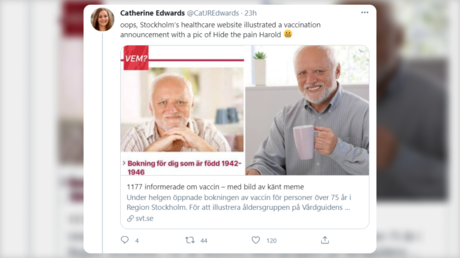 A popular internet meme in which a man seems to be smiling through suppressed pain was unwittingly deployed by a Swedish healthcare provider while encouraging elderly residents in Stockholm to come forward for their Covid-19 jabs.

The capital’s health authority said it was unaware of the internet’s use of the ‘Hide the Pain Harold’ meme, which features an old man who is smiling but has sad-looking eyes.

On Monday, the viral image, which is commonly used on social media to indicate hidden discomfort, was removed from the Covid injection booking section of Vardguiden’s website. It first appeared on Sunday as Stockholm invited people aged 75 and over for their jabs, before health bosses became aware of the image’s comedic value.

“We became aware that it was a meme via an email to the editorial staff,” a spokeswoman for the Stockholm regional authority said in a statement to Swedish broadcaster SVT. She said the image was “not in itself misleading or inappropriate” and had not damaged public confidence in the vaccine.


The meme features Hungarian man Andras Arato, who posed as a model for a number of stock photos between 2008 and 2009.

The retired electrical engineer shot to worldwide fame in meme form and has since gained further prominence after participating in a TEDx talk, a campaign for German retailer Otto, and an advert for Russian beer brand Klinskoye, among other appearances.