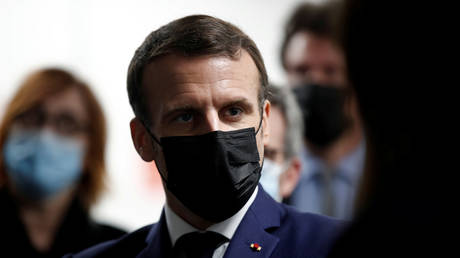 From Saturday, France will widen regional lockdown measures to the entire country in a bid to halt rising Covid-19 infections, President Emmanuel Macron has said, while defending his government’s approach to tackling the virus.

All face-to-face teaching in schools will be suspended from Monday for a week ahead of the two-week spring break, with schools set to return on April 26, Macron announced, in a televised national address on Wednesday evening.

The tougher lockdown measures, which had been in place in 19 areas including Paris, will now be extended to the whole of France for four weeks.

From Saturday evening, travel for the entire population will be limited to within a 10-kilometer radius of home, while longer essential journeys will require a certificate.

Also on rt.com
All schools should shut, says Paris mayor, with 20,000 students forced home because of Covid, as Macron set to update nation


Only essential retailers, such as supermarkets, will be allowed to remain open, and curfews will be in place from 7pm to 6am. However, inter-regional travel will be allowed for the coming Easter weekend.

“We will lose control if we do not move now,” Macron said, as he unveiled the extended measures.

He also pledged to increase intensive care capacity at hospitals from the existing 7,000 beds to 10,000 beds “in the coming days.”


The president, who is seeking a second term in office next spring, also said he stood by his administration’s handling of the pandemic, including its reluctance to impose a national lockdown in response to an uptick of infections from January.

Macron said France had “done well” not to be hit by more restrictive curbs to date, and had gained “precious days of freedom” compared to some of its European neighbors which have opted for stricter health measures.

He added that existing measures like curfews, were “effective” but “too limited” given the threat from the more transmissible UK variant B117 of the virus, which now accounts for most of France’s Covid-19 cases.