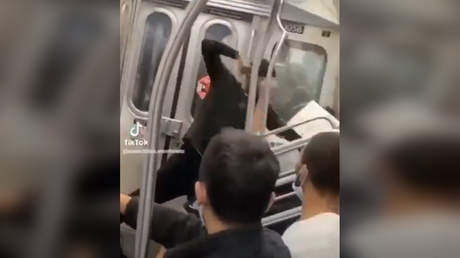 At least two more high-profile attacks on Asians were caught on video Monday in New York City in incidents that were made remarkable by both their brutality and the fact that onlookers took no action to assist the victims.

One of the attacks reportedly occurred around 11:40 a.m. outside a luxury apartment building in Manhattan. A 65-year-old Asian-American woman was walking to church when a burly man kicked her in the chest, apparently without provocation, knocking her to the ground. He then kicked her in the head powerfully at least three times before walking away.

CeFaan Kim, a reporter for the local ABC News affiliate, said the man stated, “F**k you, you don’t belong here” as he attacked the woman. But as shocking as the incident was for its brutality, many social media observers were even more disturbed by the reaction of onlookers.

NYPD says 65-year-old Asian American woman was walking to church this morning when suspect assaulted her and said “f*** you, you don’t belong here.” Happened in front of 360 W. 43rd St. 11:40am. Sources say building security guard not only failed to render her aid… 1/2 pic.twitter.com/ZLtQEHHJci

A surveillance video shot from inside the apartment building, which was viewed 7 million times on Twitter, shows at least three men witness some part of the assault without taking any action. In fact, after the suspect walked away, a security guard closed an open door to the building as the elderly woman struggled on the ground, trying to get up.

“This is absolutely disgusting,” NBC legal contributor Katie Phang said. “The fact that the security guard did nothing and closed the damn door is outrageous.”

This is absolutely disgusting. The fact that the security guard did NOTHING and CLOSED THE DAMN DOOR is outrageous! 😡😡😡

Backlash was so fierce that the Brodsky Organization, which manages the apartment building, issued a statement saying that its employees who witnessed the attack have been suspended, pending an investigation “in conjunction with their union.”

The same day, another video, viewed 3.7 million times, showed a man of Asian descent being pummeled by an attacker on a Manhattan-bound subway train. The man is punched in the face and pushed backward onto a seat. The attacker punched him in the head at least 30 times, then picked him up from behind and choked him unconscious. After the victim’s body went limp, the attacker pushed his head into the seat, and he fell to the floor with his head making a thud sound.

🚨 WARNING: VIOLENCE/BLOOD 🚨A person violently beats up and punches an Asian male in the head repeatedly in a Manhattan Bound (J) train at Kosciuszko Street Station, chokes him afterwards until he is unconscious. Be on the lookout for this person! pic.twitter.com/FCrqiPcxFc

The subway car full of witnesses did nothing to assist the victim. Some young men can be seen in the video craning their necks to get a better look at the Asian man’s head being pounded. The moment the victim’s head hits the floor, a woman appears to start clapping but suddenly stops.

The New York Police Department’s Hate Crimes unit posted a message on Tuesday, asking for help in providing information about the incident.

“It’s shocking that no one came to this man’s aid,” radio journalist Steve Kastenbaum said.

It’s shocking that no one came this man’s aid. Yes, it’s frightening to intervene. No one knows how they will react in a situation. But usually someone reacts instinctually and inserts themselves into a situation.

But the bystander reaction was apparently not unusual, at least by New York standards. When a 61-year-old Filipino-American man was attacked on a subway car in February, and slashed with a box-cutter from ear to ear, none of the other passengers intervened. In fact, after the attack, the victim had to seek help on his own, as none of the bystanders called for an ambulance or any other help. He received about 100 stitches to close his wounds.

Although surveillance footage showed that he was a young black man, local activists responded to the attack by holding a rally against “white nationalism.”

Also on rt.com
New York activists respond to brutal attack on Asian man by rallying against WHITE NATIONALISM, even though the culprit was BLACK


Self-described “race baiter” and film producer Tariq Nasheed argued that in the case of the woman who was repeatedly kicked in front of the apartment building, the security guard’s obligation was to protect the building. “There is no duty to rescue law in New York,” he said.

There is no duty to rescue law in NY. The security guard’s obligation was to protect the building..There are some interesting twistings of the law here

Other Twitter users took issue with Nasheed, arguing that the onlookers had a duty as human beings. “A world where the only thing that makes someone help an old lady being beaten up by a big bully is a law is a world of sociopaths,” self-described “anti-racist” Frederique Pommarat said. “Empathy and compassion are what make us human, not just beings.”

A world where the only thing that makes someone help an old lady being beaten up by a big bully is a law is a world of psychopaths. Empathy and compassion are what make us humans, not just beings….

Also on rt.com
Asian-American woman attacked in possible hate crime while ON THE WAY TO A PROTEST against anti-Asian violence

Key takeaways from Day 2 of the Derek Chauvin trial