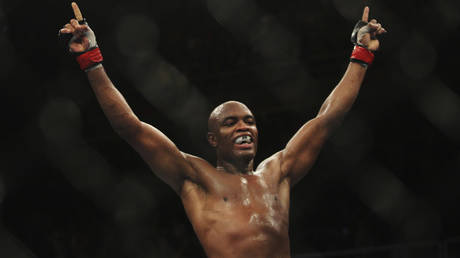 UFC legend Anderson Silva will make his comeback in combat sports through a boxing match with Julio Cesar Chavez Jr.

An announcement was made on Tuesday via TMZ Sports, and it has been claimed that the Brazilian and Mexican have already signed their contracts to face one another on June 19.

Silva, 45, has been out of contract with the UFC since November 2020, and left the organization widely-regarded as one of the best mixed martial artists of all-time.

During his lengthy reign as middleweight champion, a cross-over superfight with Roy Jones Jr was often talked about yet never materialized.

But now he can at least measure his worth in the squared circle against the son of his legendary namesake brawling father, who although not as successful as Julio Sr, was once a WBC world ruler in the same division from 2011 to 2012.

“When I look back at my journey, I see that nothing has been in vain,” said Silva. “I am extremely happy for the opportunity to test my boxing skills with Julio Cesar Chavez Jr.”

“I train continuously, always striving for resilience and to overcome obstacles. Fighting is my everlasting breath.”

Commenting on the news himself, Cesar Chavez Jr, 35, said, “I have rededicated myself to the sport that I love and I will be ready to face anyone in the Light Heavyweight division starting with Silva”

“I will be prepared to be victorious on June 19.”

Also on rt.com
‘I’ve prepared my mind for this’: UFC legend Anderson Silva admits to feeling ‘sad’ ahead of ‘last fight’ against Hall


Elsewhere on the card, Cesar Chavez Jr’s father, 58, will take on the 42-year-old son of Hector Camacho.

But sports fan aren’t too impressed by the spectacle on the whole, which will be put together by Schoen Entertainment and Global Sports Streaming.

“Bizarre…,” began one Twitter user. “Hate this for Anderson if this is a boxing match, Jr might get clowned for having a padded record etc but he’s still a legitimate professional boxer with world level experience and is like 10 years younger, Silva will get stopped.”

“This is what the circus of Floyd [Mayweather] vs [Conor] McGregor created,” remarked another. “Everyone who bashed was seething deep down they weren’t making that bag. Now everyone is doing it.”

“This was exciting in the beginning, now it’s lost its appeal. Not wasting my time on it unless there’s some prospects on the undercard or actual championship fights,” wrote one punter, who probably won’t be tuning in.