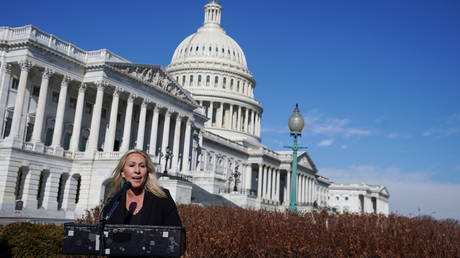 US Representative Marjorie Taylor Greene (R-Georgia) has claimed that the Biden administration aims to force all Americans to have Covid-19 vaccine passports, comparing it to the “mark of the beast” prophesied in the Bible.

Rep. Marjorie Taylor Greene: “I call it corporate communism. These are private corporations who thrive on capitalism… But yet they are adapting these communist policies, just like the Democrats are.” pic.twitter.com/Bw2A0fow2C

While President Joe Biden reportedly has no plans for his administration to impose a vaccine passport system directly, White House press secretary Jen Psaki said on Monday said the private sector may require such credentials. She said “determination or development of a vaccine passport” would be driven by the private sector, while the administration will focus on the guidelines that can be used as a basis for the requirements.


Greene, however, argued that the Biden administration is essentially using private companies as proxies to impose mandatory vaccine passports.

“It’s still the same thing,” she said. “It’s still fascism or communism or whatever you want to call it, but it’s coming from private companies. So I have a term for that: I call it corporate communism.”

Florida Governor Ron DeSantis vowed on Monday to forbid any vaccine passports in his state. Greene called on Georgia’s leaders to do the same.

Derek Chauvin Argues That His Use of Force Was Appropriate and Did Not Kill George Floyd – Reason.com