After suing over ‘Satan Shoes’, here are 5 other times Nike was forced to defend its reputation — RT Sport News 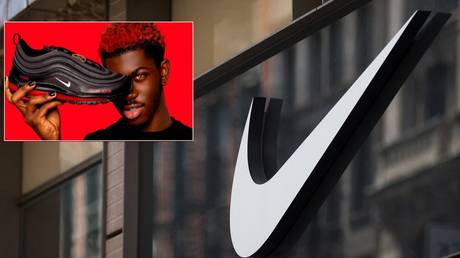 As a multinational sportswear giant that takes a stance on social issues, while also sponsoring athletes and politically-squabbling countries, Nike has often been embroiled in controversy and forced to defend its reputation.

The latest scandal threatening to bring its name into ill-repute involves Brooklyn-based streetwear company MSCHF, which has released a limited edition run of 666 pairs of Nike Air Max ‘97 sneakers dubbed ‘Satan Shoes’, whose air bubbles are filled with red ink and “one drop of human blood” and are adorned with diabolical symbols.

Nike has stressed it has ABSOLUTELY NOTHING to do with the controversial footwear, and is taking MSCHF to court for potentially harming its reputation as well as copyright infringement.


After the scramble to save their souls – or should be that ‘soles’ – here are five other occasions when Nike was forced to come out swinging.

In 1996, Nike faced a backlash when Life magazine published a photo of a young boy sewing together its footballs in the Asian country.

Its then chairman Phil Knight made a list of promises, including the minimum age to be raised to 18 for workers in shoe factories and 16 in their clothing factories.

But an independent report in 2001, Still Waiting For Nike To Do It, found that workers were still doing excessive hours in high-pressure environments and failing to meet their children’s basic needs.

“I think we’ve made significant strides, and I’m proud of what the company has done over the last three years,” Knight said at the time, as boycott movements raged.

“It may take a while longer, but I do think that it will be understood that Nike is a good citizen in all the countries that it operates in.”

Nike is accused of costing Brazil the 1998 World Cup

That they have still won the most World Cups of any nation is a source of immeasurable pride for Brazilians.

But a then-fifth or sixth overall title slipped out of their reach at France ’98 when a headed brace by Zinedine Zidane handed the host nation the trophy.

As the reigning Ballon d’Or holder, Ronaldo was on top of Planet Football. But a seizure meant he could not perform at his mercurial best.

Edmundo would have been a better punt up front, yet instead Ronaldo was picked and it effectively meant Brazil played the French with 10 men while claims have also been made he was meant to mark Zidane.

Gutted at being unable to retain the title, as seen in 1962 in the Pele era, conspiracy theories spread among the population in South American’s largest country that kit and Ronaldo sponsor Nike made him play.

At a congressional inquiry commission, R9 was forced to debunk them. “I only played after medical tests showed I was clinically and physically fit to do so. If the tests had showed otherwise, I would not have played,” he said.

“The only thing Nike have asked of me is that I wear their boots.”

San Francisco 49ers quarterback Colin Kaepernick first began making political statements on social media against police brutality, then started taking the knee during the American national anthem from the preseason through to the NFL 2016 regular season.

Supposedly blackballed by prospective teams as a consequence, once he and the 49ers parted ways, Nike stood by the ousted controversial figure and even had him star in an award-winning advertisement.

Nike shares took a nosedive and products were burned in counter-protests by patriots and Trump supporters.

The company tried to release a Betsy Ross-flag pair of Air Max 1 Quick Strike Fourth of July to make amends, but Kaepernick also kicked a stink by declaring he associated the symbol with slavery.

With Kaepernick now retired to focus on activism, the row has died down. But with race relations more strained than ever in the US, and the Black Lives Matter movement still going, it could flare up at any moment once more.

Also on rt.com
Is it still about the shoes? Nike’s latest ad builds on the company’s tradition of slickly-edited propaganda & hypocrisy

The action came as part of US sanctions on the Middle Eastern Country, with Nike fearful of hefty fines if it didn’t toe the line on Donald Trump’s watch.

Also on rt.com
Iran hits back after Nike refuses to supply players with boots due to US sanctions


“US sanctions mean that, as a US company, Nike cannot supply shoes to players in the Iranian national team at this time,” it said in an EPSN-published statement.

“Sanctions applicable to Nike have been in place for many years and are enforceable by law.”

The furor caused outrage among Iranians, who launched the No to Nike boycott movement as a response.

Born in the US west coast city in 1964, Nike once ran the Oregon Project for elite long distance running but was forced to shut it down when a doping scandal involving head coach Alberto Salazar came to light.

“Nike has always tried to put the athlete and their needs at the front of all of our decisions,” began a statement, when Salazar was handed a four-year ban.

Though pointing out that there had been no discovery PEDs were used, it continued that “this situation including uninformed innuendo and unsubstantiated assertions has become an unfair burden for current OP athletes. That is exactly counter to the purpose of the team.

“We have therefore made the decision to wind down the Oregon Project to allow the athletes to focus on their training and competition needs. We will help all of our athletes in this transition as they choose the coaching set up that is right for them.”

Also on rt.com
Mo Farah’s reputation is unravelling, so let’s stop tiptoeing around and hear the full story of his ties with disgraced Salazar

Biden, CDC Warn of ‘Impending Doom’ if States Reopen Because Of Course They Do – Reason.com