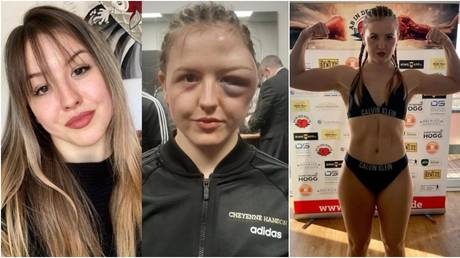 German boxer Cheyenne Hanson has displayed the horror head swelling that caused her contest with Ukraine’s Alina Zaitseva to come to a premature conclusion at the weekend.

Hanson, 23, was awarded victory on a technical decision after clashing heads with Zaitseva, causing a giant hematoma to swell grotesquely during the pair’s contest for the vacant BDB International German super featherweight title in Gersthofen.

Zaitseva, 21, was reportedly warned several times during the bout before ringside doctors stepped in to end the contest as Hanson’s injuries worsened dramatically.

“WE DID IT!!! BDB INTERNATIONAL GERMAN CHAMPION! It was a tough fight,” the newly-crowned Hanson wrote on Instagram after the bout, along with a picture of the horrendous swelling.

The fighter known as ‘Pepper’ later shared a ‘before and after’ image, making her gruesome injuries even more evident.

Hanson, whose profile lists her achievements as a European kickboxing champion, improved her boxing record to seven wins and just one defeat, while Zaitseva suffered a sixth defeat in seven contests.

Jedrzejczyk’s head swelled grotesquely during the fight, with the Pole later making light of the images by saying she looked like a “zombie.”

Also on rt.com
‘I looked like a ZOMBIE’: UFC’s Joanna Jedrzejczyk recalls horror at head hematoma after brutal epic with Zhang