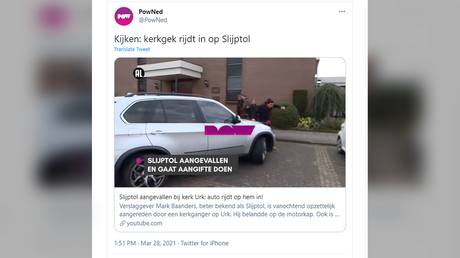 Dutch news crews were attacked in two towns on Sunday while interviewing members of protestant churches that defy the Covid-19 restrictions. One man was arrested on suspicion of driving a car into a journalist.

A news crew from broadcaster RTV Rijnmond was assaulted in the town of Krimpen aan den IJssel, where they arrived to interview worshippers outside a protestant church that had opened services to its entire congregation, despite the ongoing Covid-19 lockdown. The TV channel said its reporter was pushed from behind and then kicked in the stomach.

Police arrested a 43-year-old man following the incident. Journalist Jacco van Giessen said he was “shocked” by the attack. “I did not expect this in Krimpen on a Sunday morning,” he told the media after the altercation.

The religious group that owns the church issued a statement, apologizing “to anyone who was hurt” and asking its members to be peaceful. At the same time, the group blamed the media for “the weeks of rising tensions” around the church.

A nearly identical scuffle took place the same day in the town of Urk, where a group of men repeatedly kicked Mark Baanders, a reporter for the TV channel PowNed.

a journalist in The Netherlands was getting beat while he wanted to interview people that went to the church on a Sunday while there is a maximum on how many people are allowed to go to the church. #urk#pownedpic.twitter.com/pFNHzUjDCh

Baanders was also hit by a car in a parking lot outside the church. “I thought [the driver] would stop, but he sped up,” the journalist said. He was not injured.

Police took a 35-year-old man into custody on suspicion of deliberately driving a car into Baanders.

Several more locals were filmed acting hostile towards Baanders, with some angrily pushing away his microphone.

The Dutch Association of Editors-in-Chief said the violence against journalists poses a threat to freedom of the press and is “unacceptable.” The group criticized the police for not intervening sooner.

Meanwhile, a spokesperson for the church in Urk, H. Snoek, accused the journalists of “behaving like terrorists” and “looking for sensationalism as much as possible,” instead of gathering information. “They were blocking the doors, pushing a microphone in the faces of children,” he said.

The Washington Post Is a Propaganda Organ for War