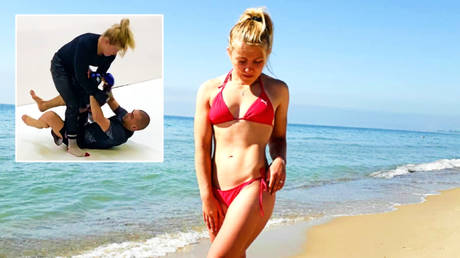 MMA stunner Ekaterina Shakalova slammed opponent Izabela Badurek onto the canvas during an eye-catching win on a Polish MMA card on Saturday, with some fans responding by calling for the 23-year-old to be snapped up by the UFC.

Competing at the Lotos Fight Night event, Shakalova took on local rival Izabela Badurek and quickly had her opponent off her feet on her way to a fourth straight win in her burgeoning career.

Convincing the judges with her display, Shakalova won a unanimous decision on the cards at the end of a 15 minute, three-round bout.

Following Khabib Nurmagomedov’s lead at UFC Vegas 22, when the retired Russian legend streamed the main event while sat alongside promotion president Dana White, Shakalova dumped the whole bout on her Instagram to celebrate her victory.

Improving her record to 5-1, the bantamweight is now on a hot streak since suffering defeat in her second ever outing, at WWFC 16, when she lost to Daria Chibisova via a guillotine choke submission.

But it was her body slam that impressed fans most in the octagon.

“Who has that Ekaterina Shakalova slam? Not f*cking with [her],” said one new-found admirer on Twitter.

“That was awesome,” enthused another. “Ekaterina Shakalova has delivered on both her trips to Poland.”

Elsewhere, some have already suggested that Shakalova is on the “road to the UFC”, but little is known about the native from Ukraine’s second-largest city, Kharviv.

A growing fanbase may be heartbroken to learn the grappler is already married, but that still doesn’t stop her sharing candid snaps with her thousands of Instagram followers.

The gym is one of her preferred locations, but Shakalova also likes to model for sultry snaps and show off the natural beauty of her homeland.

“Turn your back on your opponent,” she said alongside a shot of herself throwing a rival to the floor at a tournament last year while calling herself a “grappling girl”. “That’s my style.”

Shakalova is never shy to dispense in-depth dietary advice to her online followers alongside her photos.

“Hard workouts, muscle pain, worries, fatigue – all this is nothing,” she told them, reflecting on her learning process when she finished second at a competition in 2019.

“All thanks to the support of people close to me, who inspired me and put their strength and soul into my preparation, believed in me and were with me all the time.

“[Coming second] does not mean that you need to give up and give up the fight. It means that there are mistakes and you need to correct them, prepare hard and win.”