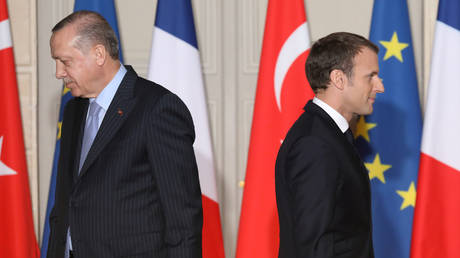 Turkey’s foreign ministry has condemned President Emmanuel Macron’s “dangerous” claim that Ankara is spreading “lies” to interfere in France’s upcoming presidential contest, as he prepares to run for re-election.

The statement from Hami Aksoy, the Turkish foreign ministry’s spokesperson, follows claims earlier this week from Macron on French television that risked further damaging relations between Paris and Ankara.

The French president claimed on Wednesday that Turkey is “playing on public opinion” and engaging in a “politics of lies” that are “spread by media controlled by the Turkish state,” and lashed out at Arab media outlets, such as Al Jazeera, which are “controlled by Qatar.”

Aksoy criticized Macron for making “dangerous” claims that are “unacceptable and contrary to the friendship and alliance” between the two nations, describing the French leader’s allegations as “unjust and inconsistent.”

Turkey doesn’t have any agenda on France’s domestic politics except the prosperity, peace, and harmony of the Turkish community.

The war of words is the latest dispute between the two nations after relations hit an all-time low last year, following a number of terrorist attacks in France and, in response, the introduction of a new law to tackle “radical Islamism” and “Islamist separatism” in the country.


Last year, as the row over France’s response to radical Islam escalated, Turkish President Recep Tayyip Erdogan stated that Macron needed to “have a mental check” and, referencing the elections in 2020, said he didn’t think the French president had “a long way to go.”

With French voters heading to the polls in 2022, Macron, who leads the centrist La Republique En Marche movement, is expected to end up in a runoff with Marine Le Pen’s National Rally party. Recent polling has shown Le Pen leading the incumbent president 27% to 24%.