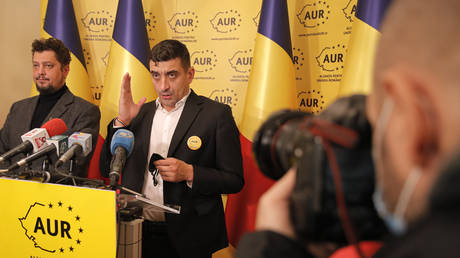 A right-wing Romanian political bloc has announced it will soon begin operating in neighboring Moldova, as part of a campaign to return it to Bucharest’s control. That’s despite its leader being banned from entering the country.

The Alliance for the Unity of Romanians (AUR) announced earlier this week that it plans to open branches in the southeastern European nation, following election successes back home. “We will begin the AUR Moldova political project from 27 March,” its leader George Simion announced in a live Facebook broadcast.

Its launch date is set to coincide with the 103-year anniversary of the Moldovan Parliament voting to reunite with Romania in 1918. However, a number of historians claim that lawmakers lacked a quorum for the vote to be valid, and in 1939 the region was annexed into the USSR. It declared independence in 1991

Many Romanian nationalists remain eager to see Moldova return to being governed from Bucharest. Simion’s party – which is highly religious, opposes LGBT+ rights, and wants to see a “patriotic” education system – has 44 seats across the Romanian parliament.


However, campaigning in Moldova might prove difficult. Simion was expelled from the neighboring country in 2018 and banned from entering for five years. Last weekend, he again attempted to cross the border but was reportedly turned away. He claims he has the right to travel across the frontier because he now holds a diplomatic passport. A legal case is ongoing.

Despite that, the AUR has a track record of effective online campaigning, leading a digital push against Covid-19 pandemic restrictions that propelled them from being a minor party to taking close to 9% of the vote in December’s parliamentary elections.

Speaking to Euronews at the time, Claudiu Tufis, an associate professor of political science at the University of Bucharest, said AUR had used criticism of public health measures to rise from obscurity. According to the academic, the party “played the anti-medicine, anti-vaccination, and anti-restrictions card to a population that is not truly educated in health issues.”

Tufis added that “their message is of building something for Romania. Nationalistic, Romania-first style, make Romania better. This kind of discourse has the potential to attract large numbers of people.”

Disabled Man on Sex Offender Registry for Prank Gone Wrong Will Get a New Hearing – Reason.com