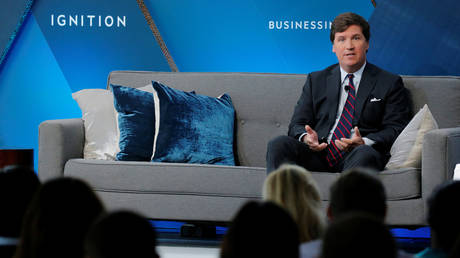 Critics are blasting CNN over a segment deeming Fox News host Tucker Carlson “the new Donald Trump,” claiming the dig is a desperate attempt to win back viewers.

“Tucker has taken Trump’s place as a right-wing leader, as an outrage generator as a fire-starter, and it’s all taking place on Fox, just as Trump’s campaign did,” Stelter said, claiming Carlson is “tapping into white male rage and resentment” and “stoking distrust of Big Tech and the media.”

Also on rt.com
Even as his own network HEMORRHAGES VIEWERS post-Trump, CNN’s Stelter questions Newsmax’s future after ‘ratings bonanza’ ends


Carlson has been in the spotlight this week for multiple controversies, including criticizing the US military changing its standards for pregnant women and being accused of harassing New York Times reporter Taylor Lorenz after pointing out the successful career she’s had for a person who claimed her “life was destroyed.”

“I can’t decide if he’s the rich man’s Trump or the poor man’s Trump,” she told Stelter. “In some ways, he’s smarter than Trump.”

Tucker Carlson is the new Donald Trump. Tucker has taken Trump’s place as a right-wing leader, an outrage generator, a fire-starter… pic.twitter.com/y8OzdAlSlN

Stelter’s Carlson segment is unlikely to win over any non-converted viewers as many have taken to social media to blast the hit piece as a desperate grab for ratings – a recent report showed that some of the network’s flagship programs have seen double digit declines with Joe Biden in office.

“Read: without Trump, we can’t gin up enough outrage to attract viewers, so we are going to attempt to make Tucker into Trump,” reporter Drew Holden tweeted in response.

With Trump gone and ratings plummeting, cable news networks are resorting to hysterical fear mongering about one another, fulfilling the industry’s destiny as an entirely self-referential, rootless helium balloon. https://t.co/mOOOVXzlIK

Some saw the piece as actually positioning Carlson for a presidential run.

Carlson has refused to back down from his controversial statements this week, despite them generating official responses from the New York Times and even the Pentagon.

After the Pentagon blasted his segment on pregnant women in the military, Carlson accused them of declaring “war on a domestic news operation” and being more “openly political” than ever.

Number of unaccompanied migrant kids in US custody up 25% since last week, administration facing unprecedented crisis