No, a Potential Recall of California Gov. Gavin Newsom Is Not a Threat to Democracy 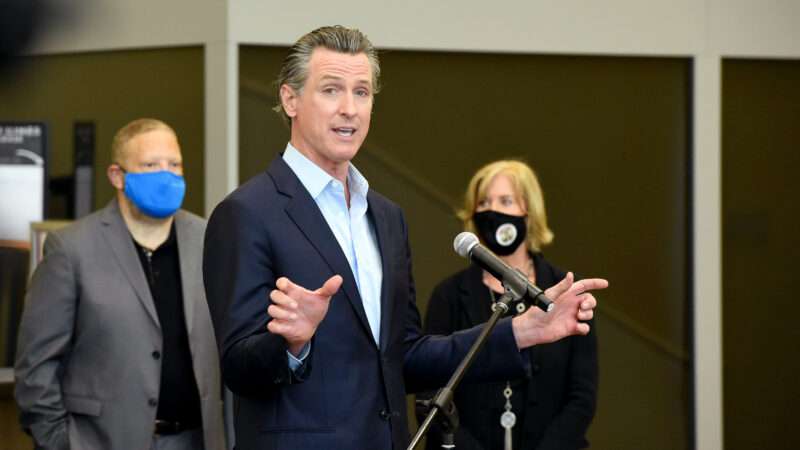 California Gov. Gavin Newsom will be in Los Angeles today to give the annual State of the State address in Dodger Stadium, possibly connecting the setting to the fact that theme parks and stadiums will finally be allowed to reopen here, months behind many other states’ reopenings.

In the meantime, a movement to recall Newsom has picked up steam amid the state’s harsh lockdowns, and organizers have announced they have surpassed the 1.5 million signatures needed for a special election. California may be voting on whether to replace Newsom this fall.

Republicans actually launched the recall campaign months before the spread of COVID-19 prompted Newsom’s authoritarian responses. This isn’t unusual—people attempt to recall politicians all the time in California. The secretary of state’s office notes every recall petition circulated for state officials, almost all of which fail to make the ballot. There were three other attempts to recall Newsom last year, and three more in 2019 that all failed to make the ballot. In 2019, the lieutenant governor, state treasurer, attorney general, secretary of state, controller, and insurance commissioner were all targets of failed recalled efforts. Heck, Gov. Arnold Schwarzenegger, who was put into office because of the successful recall of Gov. Gray Davis, was himself the subject of seven failed recall petitions.

But this one is different. Things are not golden in California right now. Initially, it appeared that California’s Sacramento-mandated shutdown actually staved off some of the worst of the pandemic’s spread. But the second spike in the fall hit hard. The rate of infections and deaths is still much lower than in states like New York and New Jersey, but California is actually on par with Florida’s numbers. Florida has notably refused to implement restrictions and lockdowns as harsh as California’s, and Republican Gov. Ron DeSantis has been a consistent target of criticism for it. And yet, forcing the shutdown of places like Disneyland and the public school system has not kept Californians any safer than Floridians.

That this recall may well make the ballot has prompted Democratic political leaders to respond in opposition to the effort. President Joe Biden is already on the record (via White House Press Secretary Jen Psaki) as opposing the recall.

Sen. Bernie Sanders (I–Vt.) weighed in on Monday with a particularly dumb take:

Right-wing Republicans in CA are trying to recall @GavinNewsom for the crime of telling people to wear masks and for listening to scientists during COVID. Extremist Republicans have done enough to undermine democracy already. We must all unite to oppose the recall in California.

First of all, some Democratic leaders have this particular way of saying they’re “listening to the science” and then implementing whatever policies they wanted to implement anyway, regardless of whether it’s actually where the science leads. Sanders himself claims to want to reduce and eventually eliminate the use of fossil fuels, but will proudly ignore the science that says you need nuclear power to do so. Like many politicians, Sanders supports science to the extent that science supports him.

But that’s not the dumbest part of the take. In reality, it was California’s progressive movement that gave citizens the ability to recall elected officials in the early part of the 20th century. According to historians, railroad magnates were using their power and money to make sure California politicians protected their monopoly. Progressive candidates couldn’t make inroads, and the recall was a way to give citizens an opportunity to force corrupt politicians out of office.

Far from being a threat to democracy, the recall is a way for citizens to respond when an elected official is not doing what they were sent to office to do. By the same token, that’s why ballot initiatives can be so valuable. In November, Californians actually used ballot initiatives to veto the favored policies of the Democratic establishment.

A healthy democracy will allow voters to shut down bad or harmful behavior by elected officials. Was the initial launch of Newsom’s recall driven by conservative politics? Most certainly. But in a state where the number of registered Democrats is now nearly twice the number of Republicans, a potentially successful recall petition should be seen as a great big red flag that Newsom’s decisions this past year do not match the citizens’ needs.